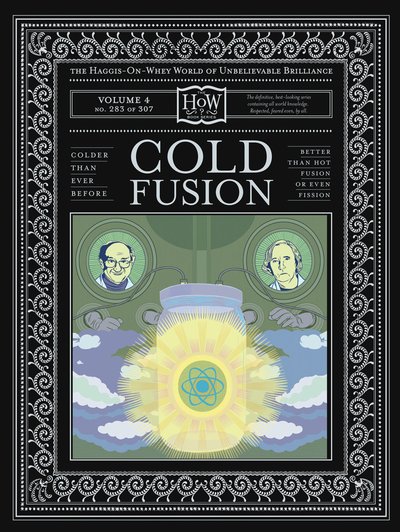 For many years the scientific and educational communities have wondered and worried about the possibility that semi-sane scholar-pretenders would find the means to publish a series of reference books aimed at children but filled with ludicrous misinformation. These books would be distributed through respectable channels and would inevitably find their way into the hands and households of well-meaning families, who would go to them for facts but instead find bizarre untruths. The books would look normal enough but would read as if written by people who should not have written them. Sadly, that day is upon us. The fourth book in the HOW series, Cold Fusion, is to be feared. Like its predecessors, Giraffes? Giraffes! and Animals of the Ocean, Cold Fusion must also be kept far from the young people in your life. This book reveals the secrets of cold fusion, one of the most controversial scientific pursuits that can be conducted in a bathtub.