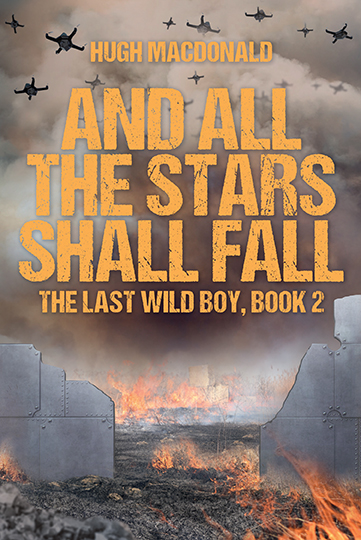 And All the Stars Shall Fall

After years of struggle by Blanchfleur to maintain its independence, the idyllic walled city of Aahimsa, a community of girls and women dedicated to making a life of peace free of the brutality and aggression of outsiders, and its prospering Manuhome, are suddenly victims of a brutal surprise attack by the forces of The World Federation of City States. Mabon and Nora are in hiding outside the city where they witness all the horrors of the assault. Adam, their adoptive son, is no longer with them, having been placed under the protection of Doctor Ueland at the Manuhome. Adam, known to the federation as The Last Wild Boy has been hunted down since his unauthorized birth in Aahimsa. Blanchfleur the mayor of Aahimsa along with her daughter and granddaughter Tish, flee for their lives along with hundreds of the Manuhome workers. A few of them are thrown together and, although some are strangers and long-time enemies, they are forced by circumstance to attempt to find a way to escape extinction in the outside world against powerful and relentless common enemies, traitors and especially the federation's murderous and heartless robotic army. They must deal with great dangers and unexpected revelations. Can they manage to work together and adjust their thinking enough to survive and find happiness against such seemingly insurmountable odds?

Hugh MacDonald is a poet, editor, author and was poet laureate for Prince Edward Island from January 2010 until December 2012.And the Stars Shall Fall is his 16th book. MacDonald was well known to Islanders as the P.E.I representative for Random Acts of Poetry which brought poetry to the streets and workplaces across Canada. He has received several awards including the L.M. Montgomery Children's Literature Award for Chung Lee loves lobsters. He Lives in Brudenell, PEI.