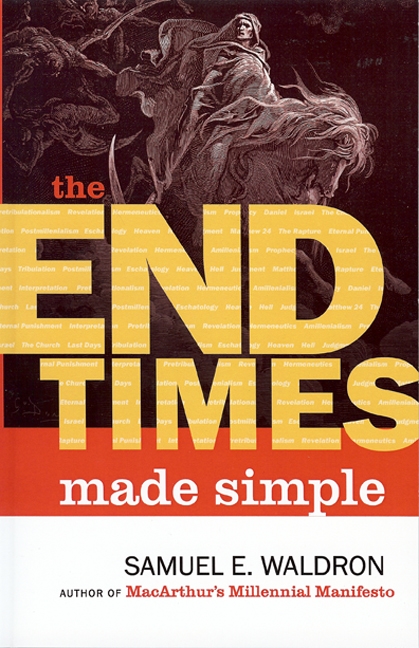 Rapture? Pre-Trib? Post-Trib? Millenium? Confused? You should be! In today's Evangelical Christian world, eschatology—or the study of the "last things"—has been turned into a sort of pseudo-science with a plethora of authors claiming to know exactly the scenario of events that are to take place just prior to the Lord Jesus Christ's return. Samuel Waldron's thesis is that there is This Age, and The Age to Come..we will be, or are, in either one or the other. Any "End Times" system that forms a hybrid of these two, or contradicts this simple formula, is unbiblical, and should be rejected.

Sam Waldron Samuel E. Waldron (born 1951) is a Reformed Baptist and professor of Systematic Theology at Midwest Center for Theological Studies (MCTS). In addition to teaching at MCTS, he is a pastor of Heritage Baptist Church in Owensboro, Kentucky.Waldron received a B.A. from Cornerstone University (1973), an M.Div. equivalency from Trinity Ministerial Academy, a Th.M. from Grand Rapids Theological Seminary (1987) and a Ph.D. from Southern Baptist Theological Seminary in 2005. From 1977 to 2001 he was a pastor of the Reformed Baptist Church of Grand Rapids.