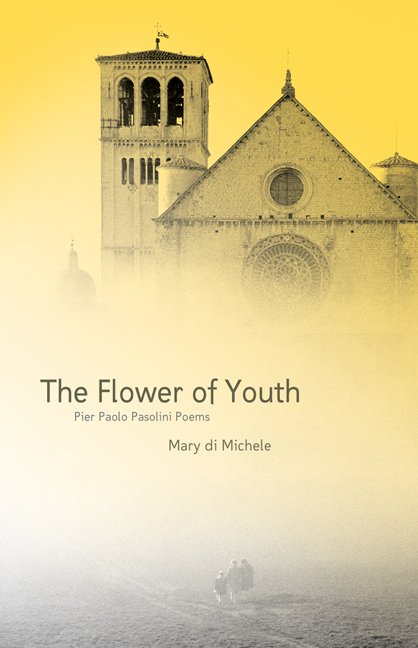 The poems in The Flower of Youth depict the coming of age and into sexual difference of the great writer and film director, Pier Paolo Pasolini. The time of this story is World War II; the place is German-occupied northern Italy. Unlike his younger brother, Guido, who took up arms to fight in the resistance, Pasolini chose to help his mother set up a school for the boys, mostly sons of farmers, too young to fight or be conscripted. The situation ignited an internal war that nearly eclipsed the historical moment for the young Pasolini, a battle within between his desire for boys and his Catholic faith and culture. The book is a kind of novel in verse including a prologue and epilogue that details di Michele’s search for Pasolini, her pilgrimage to the place and research into the time that shaped him as a man and as an artist.

Poet, novelist and member of the collaborative writing group, Yoko’s Dogs, Mary di Michele is the author of ten books including a volume of selected poems, Stranger in You, and the novel, Tenor of Love. She lives in Montreal, QC, where she teaches at Concordia University in the creative writing program.