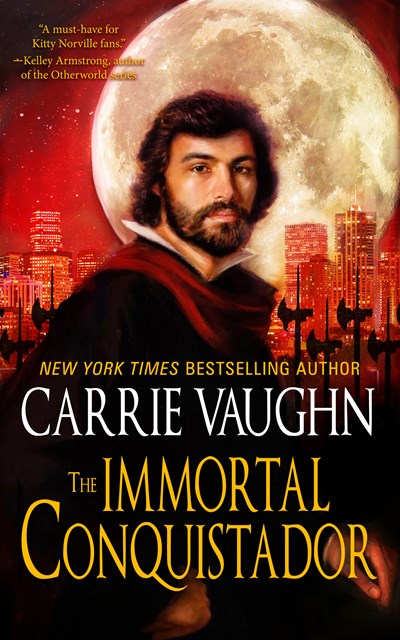 “A must have for Kitty Norville fans, but also an excellent standalone for readers new to Vaughn’s worlds.” —Kelley Armstrong, author of Bitten

From the author of the beloved Kitty Norville werewolf DJ host series, the last full tale in the series: the vampire origins of Kitty’s famed ally, Rick—and his sudden turn to darkness in the seventeenth century.

Ricardo de Avila would have followed Coronado to the ends of the earth. Instead Ricardo met with the end of his mortal life—and a new one, as the renegade vampire, Rick.

For over five hundred years, Rick has infuriated the demon world. He has ferociously protected his found-family from marauding vampires, joined forces with a legendary gunslinger, appointed himself the Master of Denver, and called upon a church buried under the Vatican. Of late, Rick has even made a famous friend: everyone’s favorite supernatural talk-show host, Kitty Norville.

Now, whether you are new to Vaughn’s fan-favorite novels, or a longtime reader, you’ll be riveted by the final full-length tale of the series.

About the Kitty Norville series:
Carrie Vaughn’s series, about a werewolf who hosts a talk radio advice show for the supernaturally disadvantaged, began with Kitty and the Midnight Hour. The series will end with the The Immortal Conquistador, and the forthcoming collection Kitty’s Mix-Tape. For more about the Kitty Norville books, go to https://carrievaughn.com/kittybooks.html.

New York Times bestselling author Carrie Vaughn is best known for her fourteen volume Kitty Norville series, about a werewolf who hosts a talk radio advice show for supernatural beings. She is also the author of the superhero novels, The Golden Age saga. Vaughn is a contributor to the Wild Cards series of shared-world novels edited by George R.R. Martin, and also writes the Harry and Marlowe steampunk short stories about an alternate nineteenth century that makes use of alien technology. She has a master’s degree in English literature, graduated from the Odyssey Fantasy Writing Workshop in 1998, and returned to the workshop as Writer in Residence in 2009. She is the winner of the RT Reviewer Choice Award for Best First Mystery for Kitty and The Midnight Hour, won the WSFA Small Press award for best short story for "Amaryllis," and she has been has been nominated for the Hugo Award. A bona fide Air Force brat (her father served on a B-52 flight crew during the Vietnam War), Vaughn grew up all over the U.S. but managed to put down roots in the area of Boulder, Colorado, where she pursues an endlessly growing list of hobbies and enjoys the outdoors as much as she can. She is fiercely guarded by a miniature American Eskimo dog named Lily.