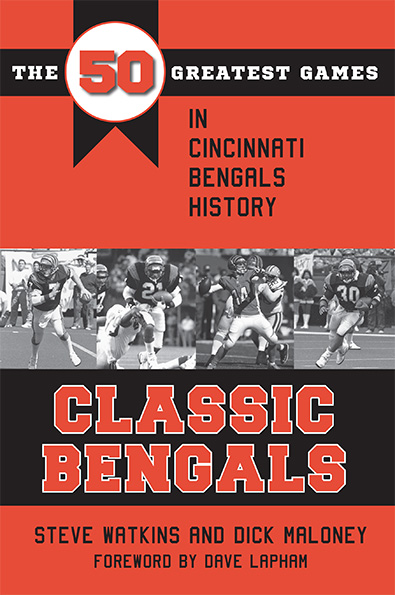 The stories behind the 50 greatest games in Bengals history, sure to spark much interest and argument among legions of loyal fans

Who can forget the famous “Freezer Bowl” AFC championship victory over the San Diego Chargers or the heart-stopping Super Bowl classic against the San Francisco 49ers and Joe Montana? Watkins and Maloney set the stage for these and other memorable games, detailing the big plays, stunning comebacks, and fantastic finishes and painting a picture that makes fans feel as though they were there.

Classic Bengals: The 50 Greatest Games in Cincinnati Bengals History includes a list of the 50 greatest games by opponent, “near misses” that almost made the list, stats on each game, and an insightful foreword from “Mr. Bengal,” Dave Lapham, who has played or broadcast games for the team in 42 of its 50 seasons.

Steve Watkins is a reporter at the Cincinnati Business Courier. A native of Sturgeon Bay, Wisconsin, and graduate of Carroll University, he has lived in Greater Cincinnati for more than 25 years and has attended plenty of Bengals games, including several featured in this book.

Dick Maloney, a Cincinnati journalist for over 34 years and a lifelong Bengals fan, currently works as a freelance journalist. As a sports editor, he was part of the award-winning sports department at the Community Press newspapers in Cincinnati.