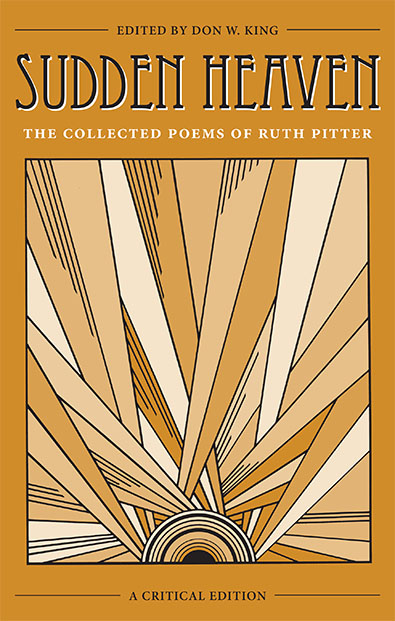 Ruth Pitter (1897–1992) may not be widely known, but her credentials as a poet are extensive; in England from the mid-1930s to the mid-1970s she maintained a loyal reader- ship. In total she produced 17 volumes of new and collected verse. Her A Trophy of Arms (1936) won the Hawthornden Prize for Poetry in 1937, and in 1954 she was awarded the William E. Heinemann Award for The Ermine (1953). Most notably, perhaps, she became the first woman to receive the Queen’s Gold Medal for Poetry in 1955; this unprecedented event merited a personal audience with the queen.

In addition, from 1946 to 1972 she was often a guest on BBC radio programs, and from 1956 to 1960 she appeared regularly on the BBC’s The Brains Trust, one of the first television talk shows; her thoughtful comments on the wide range of issues discussed by the panelists were a favorite among viewers. In 1974 the Royal Society of Literature elected her to its highest honor, a Companion of Literature, and in 1979 she received her last national award when she was appointed a Commander of the British Empire.

Pitter’s best poems focus on nature and the human condition, taking us to hidden or secret places, just beyond the material, to the meaning of life. Her poems are often the result of a heightened sense of felt experience—intuitive and evocative. If human life is lived behind a veil faintly obscuring reality, Pitter’s poems often lift the edge of the veil.

Sudden Heaven arranges Pitter’s poems in chronological order, allowing readers to follow her maturation as a poet, and it features a number of poems that have never before appeared in print.