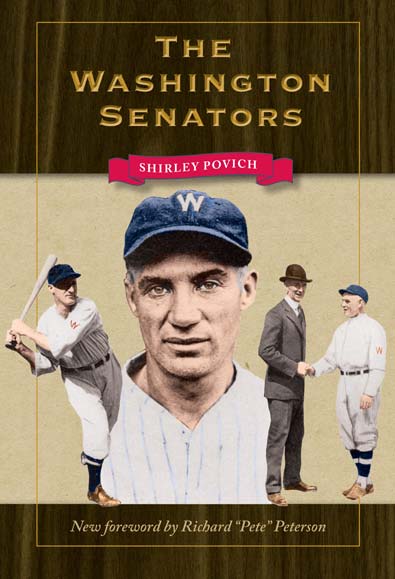 A facsimile edition of the celebrated 1954 history of the Senators

Shirley Povich’s history of the Washington Senators originally appeared in 1954 as part of the popular series of major league team histories published by G. P. Putnam. With their colorful prose and delightful narratives, the Putnam books have been described as the Cadillac of the genre and have become prized collectibles for baseball readers and historians.

One of the American League’s eight charter franchises, the club was founded in Washington, D.C., in 1901 as the Washington Senators. In 1905 the team changed its name to the Washington Nationals. However, fans and newspapers persisted in using the “Senators” nickname, and over time the use of “Nationals” faded and “Senators” reemerged as the team’s official name.

In their first nine seasons the Senators finished last four times and didn’t climb above sixth place until 1912. The major catalysts in their rise were the ascendance to greatness of Walter Johnson, who emerged in 1910 as the American League’s best pitcher, and the hiring of Clark Griffith as manager in 1912. Griffith pioneered in the use of relief pitchers and in signing Caribbean talent. Although the team’s new respectability faded, the 1924 hiring of twenty seven-year-old Bucky Harris as player-manager brought instant results, with a surprise World Series Championship in Harris’s first season at the helm. The club repeated as AL champions in 1925 and its best season came in 1933, when it captured the AL title with a team record 99–53 mark. The Senators had only four more winning seasons over the next twenty six years.

Povich’s unique insight as a Washington Post sportswriter led to thoughtful advice and comfort for the long-suffering Senators fans. Legends like Walter Johnson, Gabby Street, Bucky Harris, Roger Peckinpaugh, Sam Rice, Firpo Marberry, Joe Cronin, and Leon “Goose” Goslin fill these pages, and their colorful exploits are woven into the fabric of each season’s story. Sure to be treasured by baseball lovers everywhere, The Washington Senators is another enjoyable addition to the Writing Sports Series.

Shirley Povich (1905–1998) was a sports reporter, sports editor, and columnist for the Washington Post for seventy-six years. He was elected to the National Sportswriters Hall of Fame, received the Baseball Writers Association of America’s J. G. Taylor Spink Award, and is the only sportswriter to receive the National Press Club’s Fourth Estate Award.