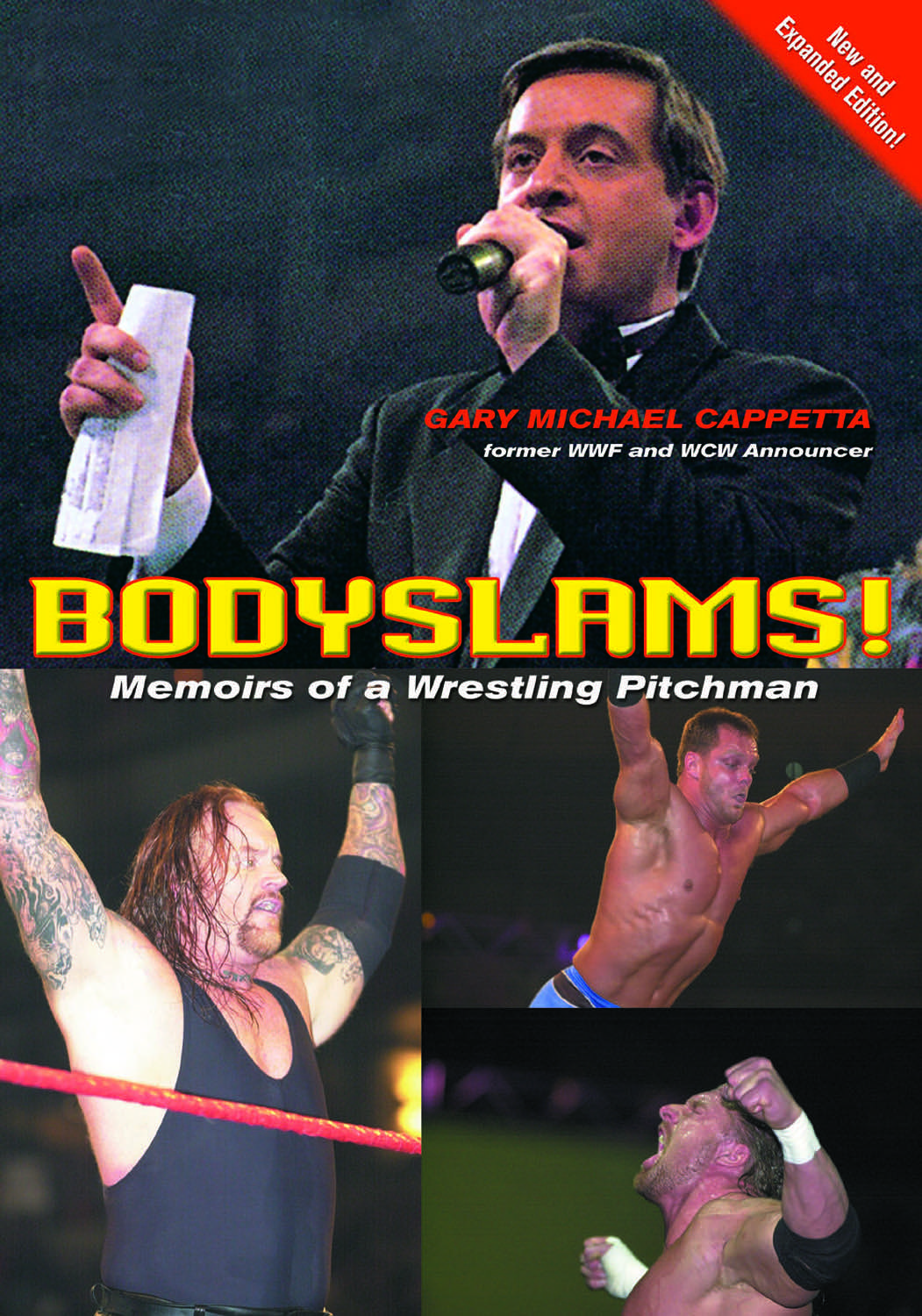 Memoirs of a Wrestling Pitchman

They’re held captive by the glamour and the grotesque of the oldest spectacle known to man. But the inquisitive public at large, along with a vast international network of pro wrestling aficionados, yearn for more than the intriguing soap opera scenarios and daring athleticism that they view every week on television and live at venues around the world. They want a behind-the-scenes view beyond what is routinely represented to the public. In short, curious observers and ardent wrestling fans will be captivated by what Gary Michael Cappetta has delivered in Bodyslams! Memoirs of a Wrestling Pitchman. A tome about one of those guys who rents a tuxedo and tells us who's about to enter the ring? How informative could that be? The answer is: “Very, if you open your mind and open the book.” Unenlightened fans may be quick to dismiss ring announcers when considering who is part of wrestling's inner circle. They fail to realize these people occupy the same locker rooms, hotels and vehicles as their athletic counterparts, and deal with the same bosses, road temptations and co-workers. Though a mike man shares only a fraction of the glory, he is definitely “one of the boys.” Originally a schoolteacher, Cappetta spent over 20 years working the wrestling arenas. Starting as a part-timer with the WWWF in 1974, when he was paid the sum of $25 per show, Cappetta stuck with it until he lost his spot in the asylum that was WCW in 1995. It would be an exaggeration to say Gary has known everyone and seen everything - but only a slight one. The author was in the thick of things when Vince McMahon began his take-no-prisoners national expansion, and later watched Verne Gagne destroy the once-mighty AWA and Eric Bischoff resurrect WCW. Who was there when the infamous hotel bloodbath between Arn Anderson and Sid Vicious erupted? Who wound up with Mick Foley's ear when it was torn off in Germany? The only witness to an incident wherein rookie Mark Callaway nearly sent Buzz Sawyer to meet a real undertaker? The one and the same G.M. Cappetta. Bodyslams! seamlessly weaves commentary about the business and the people who populate it, travel tales and insight into the personal life of its author. Unlike many other mat biographies, this is neither a boast or a bitch-fest—and there is no promotion behind the publication attempting to rewrite history to its liking. Bodyslams! is the first book to shed light on the dangerous games that both the performing wrestlers and their corporate employers play in order to acquire power, fame and wealth. The book runs chronologically and serves as both a history and an expose of American wrestling as Mr. Cappetta has witnessed during the three decades he spent as an announcer for America's two dominant wrestling promotions.

Gary Michael Cappetta spent over 20 years working the wrestling arenas as a ring announcer. He was in the thick of things when Vince McMahon began his take-no-prisoners national expansion. He later watched Verne Gagne destroy the once-mighty AWA, and Eric Bischoff resurrect WCW.