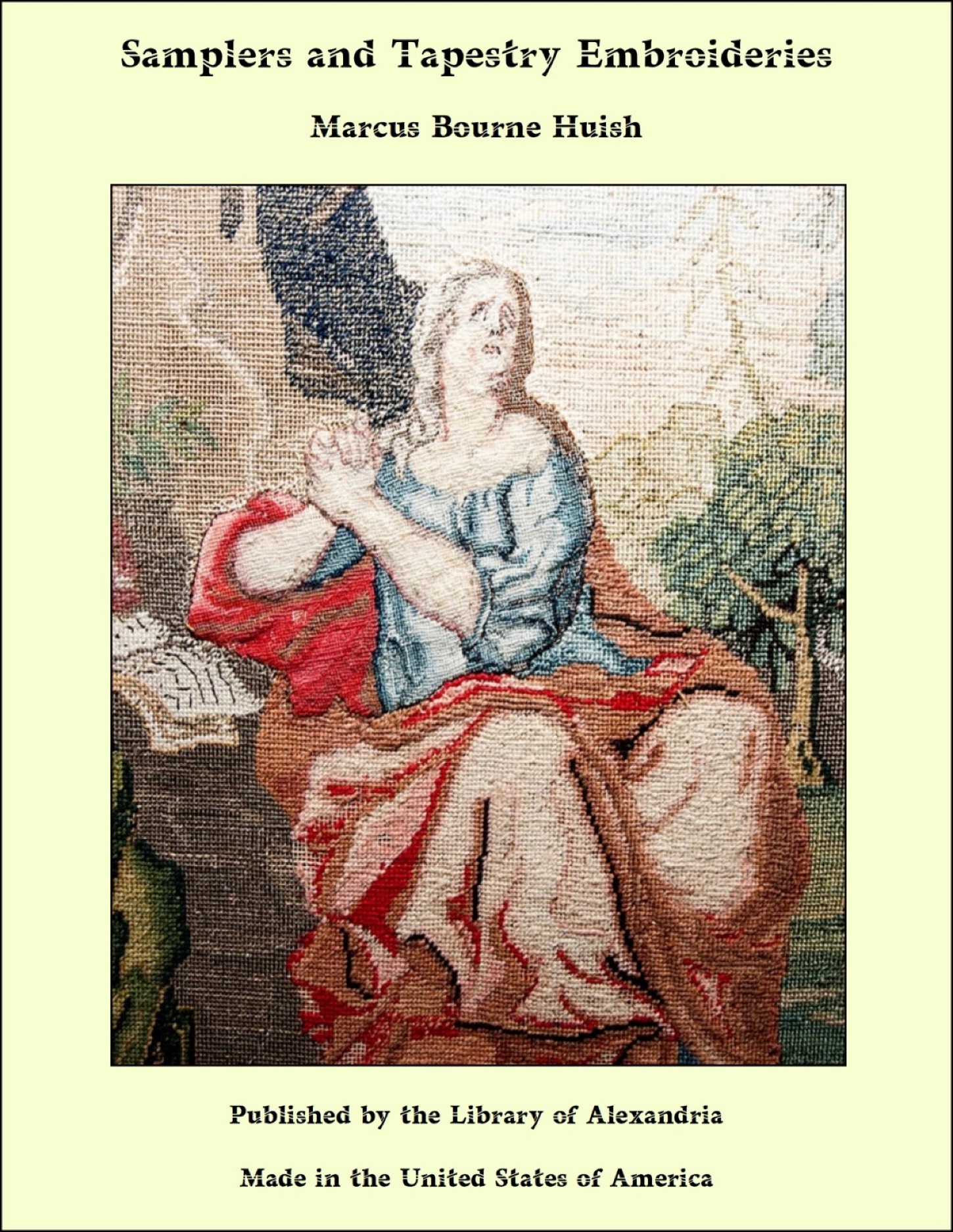 AMONGST all the Minor Arts practised by our ancestresses, there was certainly no one which was so much the fashion, or in which a higher grade of proficiency was attained, as that of needlework. It was in vogue in the castle and the cottage, in the ladies’ seminary and the dame’s school, and a girl’s education began and ended with endeavours to attain perfection in it. Amongst the earliest objects to be shown to a mother visiting her daughter at school was, as is seen in the charming picture by Morland in the Wallace Collection, the sampler which the young pupil had worked. These early tasks were, very certainly in the majority of instances, little cared for by the schoolgirls who produced them, but being cherished by fond parents they came in after years to be looked upon with an affectionate eye by those who had made them, and to be preserved and even handed down as heirlooms in the family. For some reason, not readily apparent, no authority on needlework has considered this by-product of the Art to be worthy of notice. In the many volumes which have been penned the writers have almost exclusively confined their attention to the more ambitious and, perhaps, more artistic performances of foreign nations. To such an extent has this omission extended that in a leading treatise on “Needlework as Art,” samplers are dismissed in a single line, and in a more recent volume they are not even mentioned. It follows that the illustrations for such books are almost without exception culled from foreign sources, to the entire exclusion of British specimens. It may be contended that the phase of needlework to which special attention is drawn in this volume cannot be classed amongst even the Minor Arts, and therefore is not worthy of the notoriety which such a work as this gives to it. Such a contention can fortunately be met by the authority of one whose word can hardly be challenged on such a question, namely, Mr Ruskin. Some years ago, upon a controversy arising in the press as to what objects should, and what should not, find a place in a museum, the author, in his capacity of editor of The Art Journal, induced Mr Ruskin to furnish that magazine with a series of letters containing his views on the matter. In these, after dealing with the planning of the building and its fitting up with the specialties which the industry of each particular district called for, he set aside six chambers for the due exposition of the six queenly and music-taught Arts of Needlework, Writing, Pottery, Sculpture, Architecture, and Painting, and in these the absolute best in each Art, so far as attainable by the municipal pocket, was to be exhibited, the rise and fall (if fallen) of each Art being duly and properly set forth. Mr Ruskin did not, however, content himself with claiming for needlework a prominent position. Had he only done this, his dictum might have availed us but little as regards admission of the branch of it to which we shall devote most of this volume. With the thoroughness which was so characteristic of him, he gave chapter and verse for the faith that was in him, clenching it with one of his usual felicitous instances, which, in this case, took as its text the indifferent stitching of the gloves which he used when engaged in forestry.