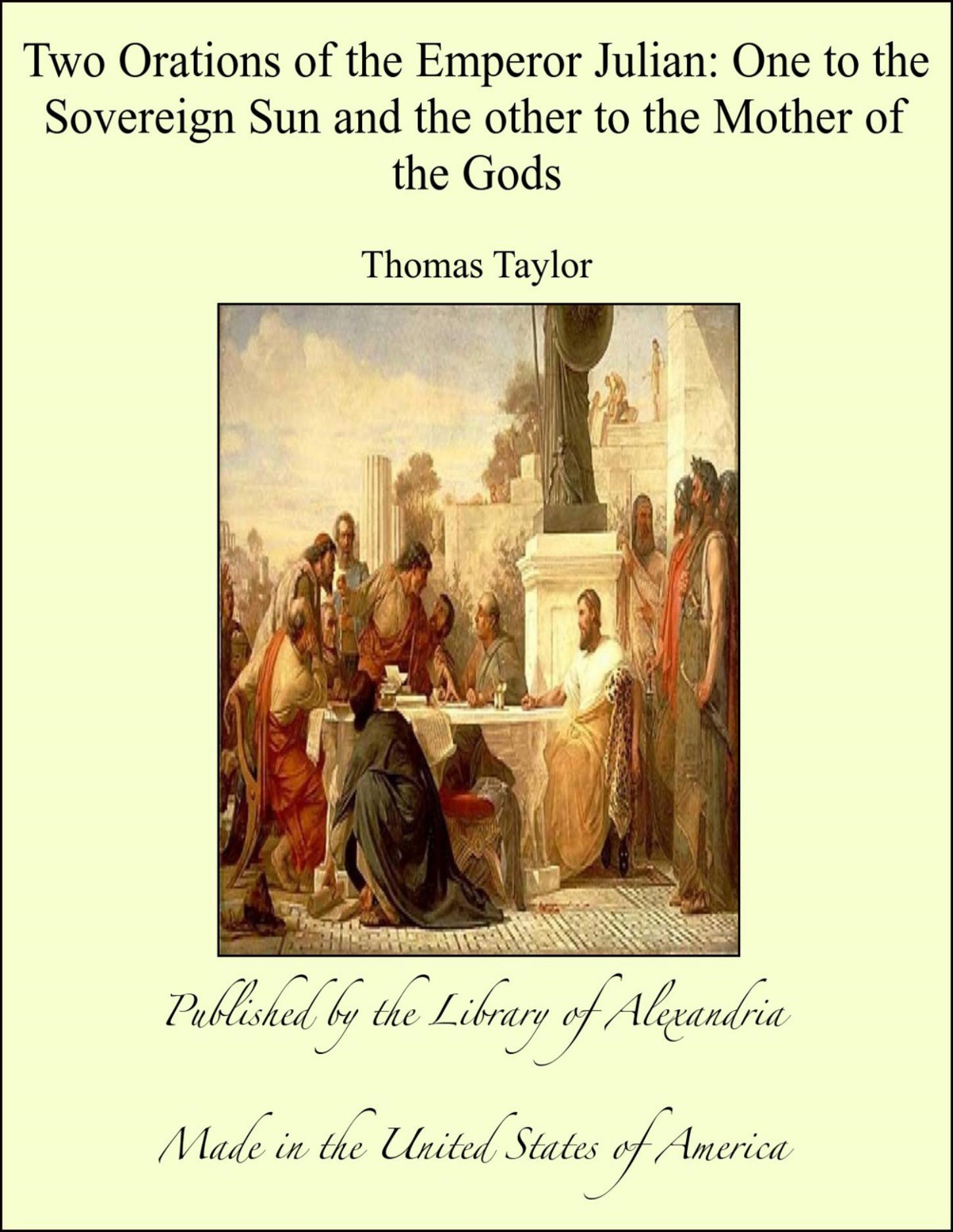 Two Orations of the Emperor Julian

THE Emperor Julian, the author of the two following Orations, is well known in the character of a Sovereign and an Apostate which he once sustained, but very few are acquainted with him in the characters of a Theologist and Philosopher, which he displays through the whole of his works, in a manner by no means contemptible or weak. It is true, indeed, that his philosophical and theological attainments are not to be compared with those of Pythagoras, Plato, and Proclus, who appear to have arrived at the summit of human piety and wisdom, or with those of many of the Platonists prior and posterior to Proclus; but, at the same time, they were certainly far superior to those which many celebrated antients possessed, or which even fell to the share of such a man as the biographer Plutarch. Indeed it is impossible that a man burthened with the weight of a corrupt empire, such as that of Rome, or that the governor of any community except a republic, like that of Plato, should be able to philosophize in the most exquisite degree, and leave monuments behind him of perfect erudition and science. Julian, however, appears to have possessed as much of the philosophical genius as could possibly be the portion of an Emperor of Rome, and was doubtless as much superior to any other Emperor, either prior or posterior to him, as the philosophy and theology which he zealously professed transcend all others in dignity and worth. Hence, in the ensuing orations, he has happily blended the majestic diction of a Roman Emperor with the gravity of sentiment peculiar to a Platonic philosopher, and with that scientific and manly piety which is so conspicuous in the writings of antient theologists. His language is, indeed, highly magnificent, and in every respect becoming the exalted rank which he sustained, and the great importance of the subjects of his discourse: in short, the grandeur of his soul is so visible in his composition, that we may safely credit what he asserted of himself, that he was formerly Alexander the Great. And if we consider the actions of Alexander and Julian, we shall easily be induced to believe, that it was one and the same person who, in different periods, induced the Indians, Bactrians, and inhabitants of Caucasus, to worship the Grecian deities: took down the contemptible ensign of his predecessor, and raised in its stead the majestic Roman eagles; and every where endeavoured to restore a religion which is coeval with the universe, by banishing gigantically-daring, and barbaric belief. The first of these orations, which celebrates that glorious divinity, the Sun, is not only valuable for the piety and eloquence displayed in its composition, but for its containing much important information from a treatise of Jamblichus on the gods, which is unfortunately lost. The name of Jamblichus must, indeed, be dear to every genuine lover of Platonism, and any work replete with his doctrines may certainly, with justice, lay claim to immortality. However, as the theology of Orpheus, Pythagoras, and Plato, does not appear to have been unfolded in the most consummate perfection, even by Jamblichus himself, this great talk being reserved for the incomparable Proclus, we shall find in such books of Proclus as are fortunately preserved, a more accurate account in some particulars of the essence and powers of the Sun. This account I shall lay before the reader, (after I have premised a few particulars concerning the existence and nature of the gods), that he may see in what the Emperor's discourse is defective, and in what it is agreeable to the truth.