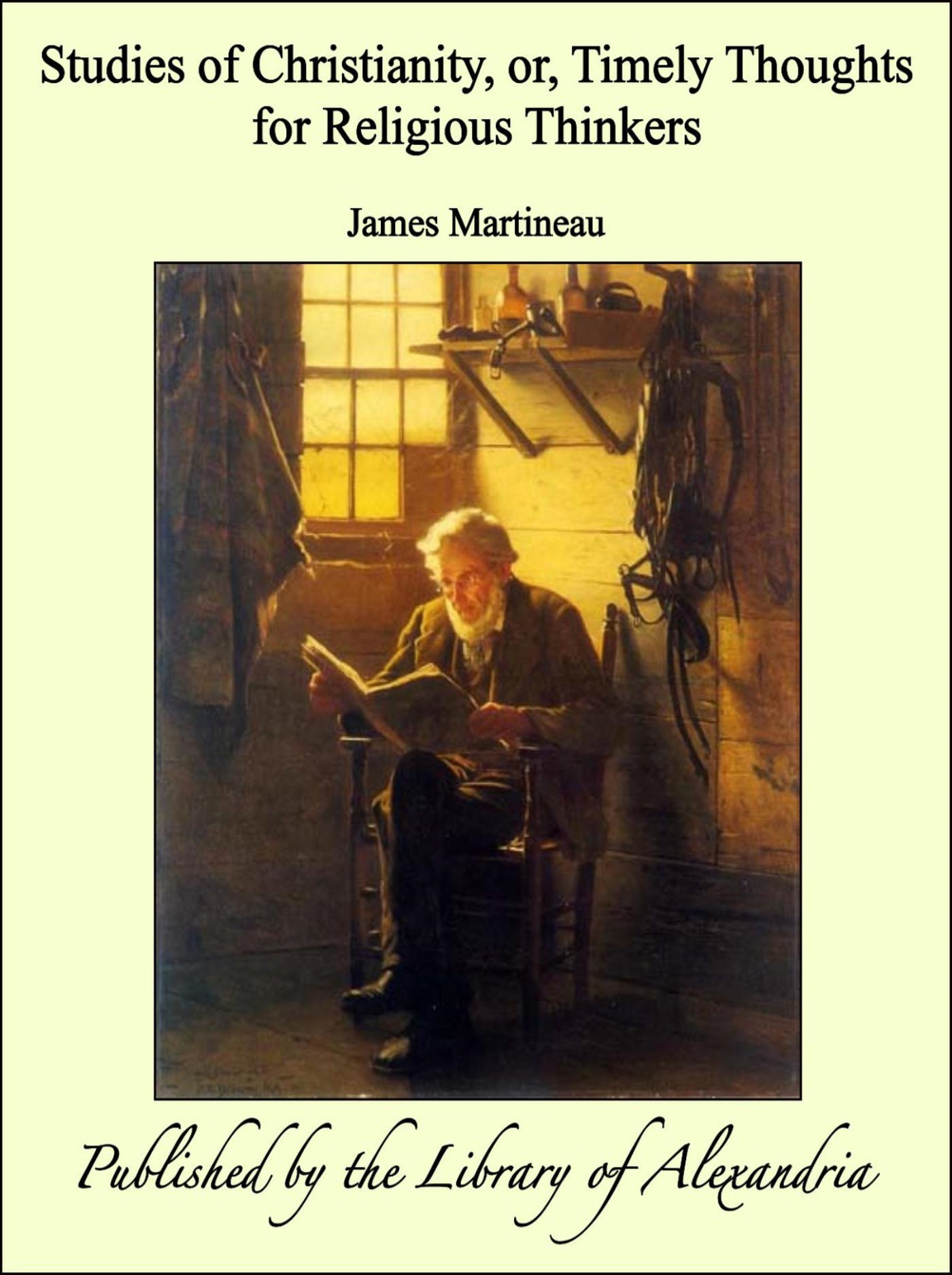 Studies of Christianity, or, Timely Thoughts for Religious Thinkers

The list of works prefixed to the article here entitled Distinctive Types of Christianity, as it appeared in the Westminster Review, and the opening sentence referring to them, have been accidentally omitted. Two or three of the papers belong to the author's earlier years, but are inserted here equally on account of their eminent ability, their special timeliness, and their striking adaptation to the general purpose of the work; namely, to throw light on the true nature of Christianity. They will also be new to most of those whom they now reach. The last paper in the volume is one of the first its writer published, in his comparative youth. We shall be disappointed if the benignant wisdom and moral fidelity of its catholic lessons do not secure a sympathetic response in many a quarter once closed against such appeals. In selecting from Mr. Martineau's numerous invaluable articles, not already published in book-form, the contents of the present work, the rule has not been so much to choose the ablest productions, as to take those best fitted to meet the wants of the time, by diffusing among ministers, students of divinity, and the cultivated laity a knowledge of the most advanced theological and religious thought yet attained. We regret that the necessary limits of the volume exclude several of the author's most instructive and inspiring essays; particularly the magnificent one in the National Review upon Newman, Coleridge, and Carlyle; also the one upon Lessing as a Theologian. We have called this volume Studies of Christianity, simply as a convenient indication of the general character of its contents. In justice to the author, it should be borne in mind that the separate papers were prepared to meet various occasions, without a suspicion that they would ever be brought together to form a book. Of course they do not express his complete views of the mighty subject which they fragmentarily treat. The relative order and rank of his convictions, the interpretation of Christianity from its inner side, appear much better in his Endeavors after the Christian Life,>—by far the richest and noblest series of sermons in the English language. Still, a kind of unity pervades the different pieces composing this collection. One Christ-like strain of sentiment breathes through them all. The same consecrating fealty to truth presides over them all. The same grand outline of principles and unvarying standard of judgment are constantly evident. The same marvellous acumen, breadth of learning, and exquisite culture, everywhere appear. Each article is more or less directly an illustration of Christianity, as something moral, spiritual, vital, dynamic, to be practically assimilated by the soul, in distinction from the common exposition of it, as something sacerdotal, dogmatic, formal, forensic, once enacted and now to be mimetically observed. The energetic patience of labor, the detersive intellect, the unalloyed devoutness of spirit, the telescopic range both of faculty and equipment, revealed even in these wayside products, awaken in us an unappeasable desire for a more purposed and systematic work from the same mind, now in its fullest maturity. In the mean time we will express our grateful appreciation of the contributions already furnished, by giving them further circulation, assured that no truly pious and intelligent person, free from bigotry and shackles, can peruse them without receiving equal measures of delight and profit. Mr. Martineau is so thoroughly acquainted with the processes and results of spiritual experience, with the sciences of nature, and with the whole realm of metaphysical philosophy, and his own wealthy faculties are so tenacious in their activity and freshness, that every subject he touches receives novelty, light, and ornament. He is emphatically a teacher for the teachers,—a greater guide and master for the common guides and masters. Traversing the whole domain of human contemplation with the defining lines of analysis, clothing the severe materials of science with the colors of Ásthetic art, he sheds on every theme the illumination of intellectual genius, and transfuses every thought with the distinctive sentiments of piety. Thus is afforded that rarest of all spectacles,—and the one now most needed by the cultivated religious world,—of a man who is greatly endowed at once as philosopher, poet, and Christian, and who with simultaneous earnestness in each capacity is devoted, by the whole labors of his life, to the instruction of mankind