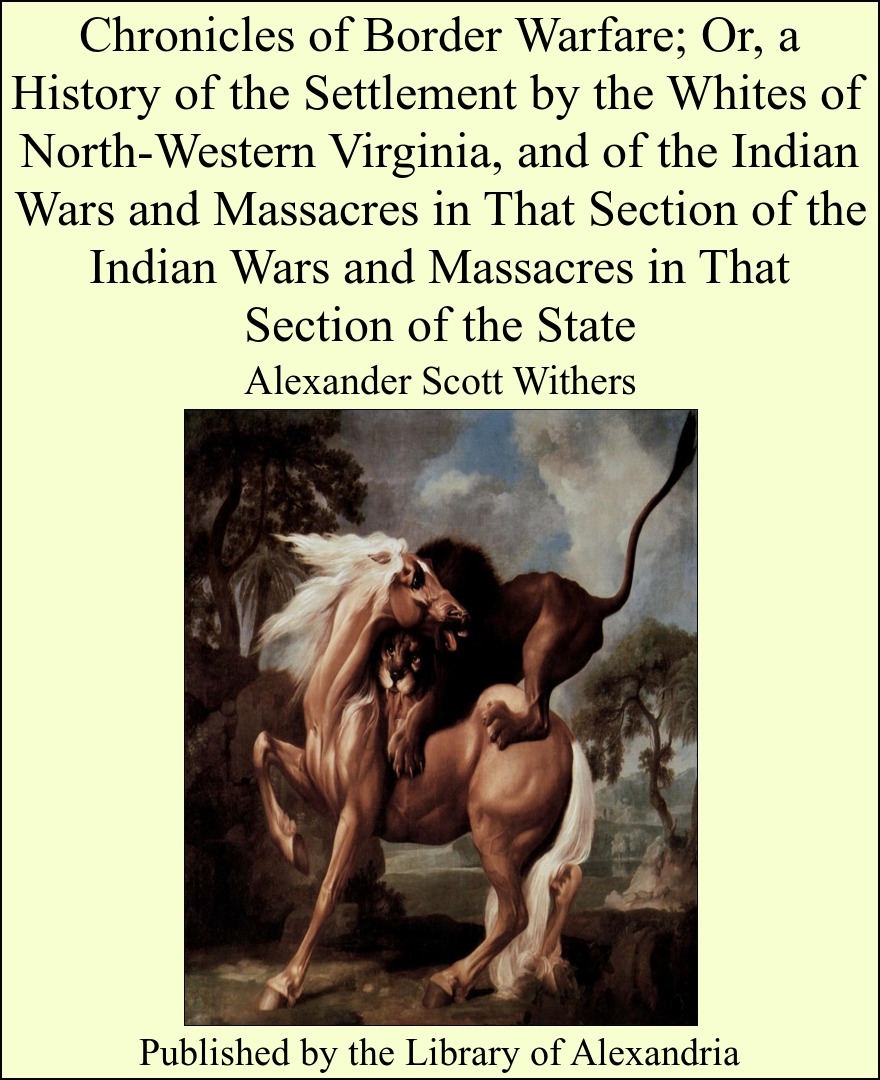 It is sixty-four years since the original edition of Withers’s Chronicles of Border Warfare was given to the public. The author was a faithful recorder of local tradition. Among his neighbors were sons and grandsons of the earlier border heroes, and not a few actual participants in the later wars. He had access, however, to few contemporary documents. He does not appear to have searched for them, for there existed among the pioneer historians of the West a respect for tradition as the prime source of information, which does not now obtain; to-day, we desire first to see the documents of a period, and care little for reminiscence, save when it fills a gap in or illumines the formal record. The weakness of the traditional method is well exemplified in Withers’s work. His treatment of many of the larger events on the border may now be regarded as little else than a thread on which to hang annotations; but in most of the local happenings which are here recorded he will always, doubtless, remain a leading authority––for his informants possessed full knowledge of what occurred within their own horizon, although having distorted notions regarding affairs beyond it. The Chronicles had been about seven years upon the market, when a New York youth, inspired by the pages of Doddridge, Flint, and Withers, with a fervid love for border history, entered upon the task of collecting documents and traditions with which to correct and amplify the lurid story which these authors had outlined. In the prosecution of this undertaking, Lyman C. Draper became so absorbed with the passion of collecting that he found little opportunity for literary effort, and in time his early facility in this direction became dulled. He was the most successful of collectors of materials for Western history, and as such did a work which must earn for him the lasting gratitude of American historical students; but unfortunately he did little more than collect and investigate, and the idea which to the last strongly possessed him, of writing a series of biographies of trans-Alleghany pioneers, was never realized. He died August 26, 1891, having accomplished wondrous deeds for the Wisconsin Historical Society, of which he was practically the founder, and for thirty-three years the main stay; in the broader domain of historical scholarship, however, he had failed to reach his goal. His great collection of manuscripts and notes, he willed to his Society, which has had them carefully classified and conveniently bound––a lasting treasure for historians of the West and Southwest, for the important frontier period between about 1740 and 1816. Dr. Draper had exhibited much ability as an editor, in the first ten volumes of the Wisconsin Historical Collections. In 1890, the Robert Clarke Company engaged him, as the best living authority on the details of Western border history, to prepare and edit a new edition of Withers. He set about the task with interest, and was engaged in the active preparation of “copy” during his last months on earth; indeed, his note upon page 123 of this edition is thought to have been his final literary work. He had at that time prepared notes for about one-fourth of the book, and had written his “Memoir of the .” The matter here rested until the autumn of 1894, when the publishers requested the present writer to take up the work where his revered friend had left it, and see the edition through the press. He has done this with some reluctance, conscious that he approached the task with a less intimate knowledge of the subject than his predecessor; nevertheless he was unwilling that Dr. Draper’s notes on the early pages should be lost, and has deemed it a labor of love to complete the undertaking upon which the last thoughts of the latter fondly dwelt