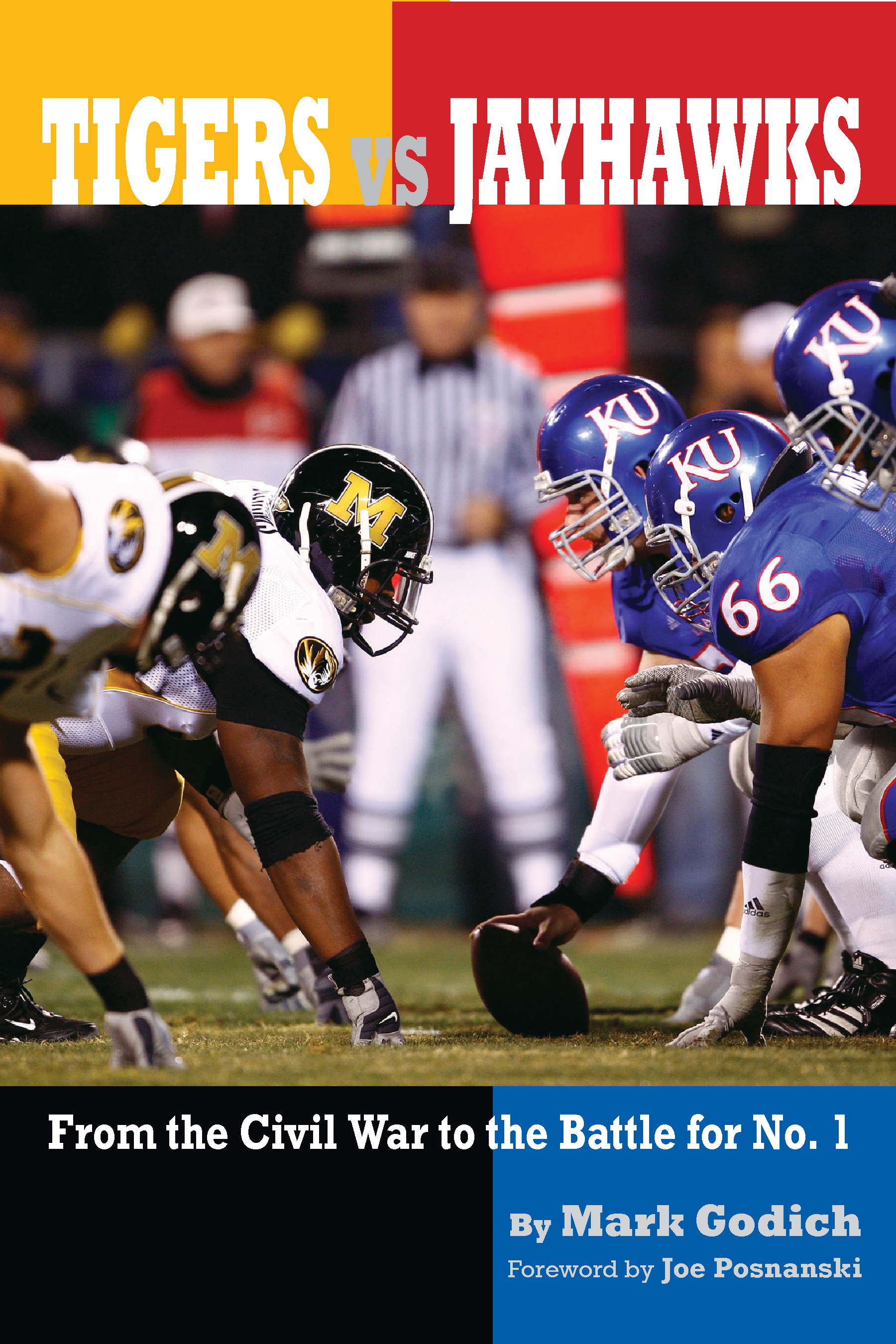 From the Civil War to the Battle for No.1

Missouri and Kansas went from unranked at the start of the 2007 college football season to playing for No. 1 in the country on the Saturday after Thanksgiving, so no wonder Brent Musburger chose his words carefully as he addressed a national television audience moments before kickoff of the rivals’ historic meeting. “Let this sink in,” Musburger, the long-time broadcaster, said. “If either Kansas or Missouri wins their next two games, they will play for the national championship.” Kansas and Missouri? Really? Really. The 2007 college football season was unlike any other. Yet in a year filled with unfathomable twists and turns, Missouri and Kansas kept winning, setting up the biggest game ever played in the oldest rivalry west of the Mississippi. Tigers versus Jayhawks: From the Civil War to the Battle for No. 1 dissects the monumental meeting, but it does much more than that. This book traces the bad blood between fans of the schools to the Civil War and before. It examines how Coaches Gary Pinkel of Missouri and Mark Mangino of Kansas built Big 12 doormats into national-title contenders. It deconstructs the deal that was struck to move the 2007 game to Kansas City, Mo., denying the Jayhawks the opportunity to host the biggest game in program history on their campus. It explores the Orange Bowl’s head-scratching decision to invite Kansas over Missouri. Most important, this book takes the reader inside Arrowhead, inside the locker rooms, inside the huddles, inside the headsets, inside the heads of the players and coaches and administrators. The unquestioned leader of the Tigers was defensive tackle Lorenzo Williams. He describes in chilling detail the shocking death of teammate Aaron O’Neal, who collapsed in front of him after a voluntary workout in July 2005. Williams talks about the circuitous route he took to Columbia as well as the direct path he took to sack Kansas quarterback Todd Reesing for a safety on the game’s signature play. Tight end Martin Rucker, who signed with his home-state school because he wanted to be the guy who put the Tigers back on the football map, recalls the special satisfaction he got when he scored on a fake field goal against Nebraska. Chase Daniel reveals why he honored his commitment to Mizzou even after his beloved Texas Longhorns made an 11th-hour offer. And the follow-the-book Pinkel explains why he broke one of the tenets of Coaching 101 with the message he delivered to his captains two days after an October loss to Oklahoma. Mangino reflects on the fall afternoon in 2004 that was a turning point for his program, when after a bitter loss he showed his players he had their backs. Reesing shares how a star quarterback from Austin ended up in Lawrence and how he played with a chip on his shoulder after one Texas school told him he was on its B-list of recruits. And Carl Peterson discusses how he worked tirelessly for 15 years to bring the game to Arrowhead, finally fulfilling a dream of Kansas City Chiefs owner Lamar Hunt. It would arguably be the city’s biggest sporting event ever. The atmosphere was electric. “You could feel the hostility in the air,” Mizzou backup quarterback Chase Patton says. These are just a few of the storylines surrounding the biggest game two bitter, border rivals will ever play, a game a former President called the best he has ever seen. As the 2007 season played out, Missouri and Kansas became the talk of the college football world. And for one frigid November night, all eyes were on Arrowhead Stadium. Missouri-Kansas? Really!

Mark Godich has been a senior editor at Sports Illustrated since 1995. In 2007, he was the magazine’s college football editor. A graduate of the University of Missouri’s highly acclaimed School of Journalism and a former instructor there, he has had a career in sportswriting and editing that has spanned five decades. Before joining SI, he also made stops at the Abilene (Texas) Reporter-News, the Dallas Times Herald, The Associated Press, The National Sports Daily and Golf Shop Operations. He lives in Plainsboro, N.J., with his wife, Leigh, and son, Steven