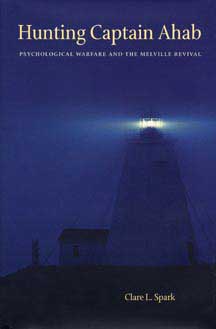 Psychological Warfare and the Melville Revival

In this provocative and vigorously argued interdisciplinary study of the development of institutional censorship, Clare Spark explores the complexities of 20th-century American cultural politics through the protagonists of the Melville Revival. She investigates closely the history of the Revival and its key critics, who manipulated Melville’s life and writings in the service of their own particular social and political agendas. Although often boldly conjectural and speculative, Spark’s assertions are based on her meticulous and thorough exploration of either newly opened or previously unexplored archival materials of leading Melville scholars. In addressing the distinction between what she calls the radical and conservative Enlightenment, Spark makes her way through Melville’s often confusing and contradictory texts and examines the disputes within Melville scholarship, which often center on the mesmerizing figure of Ahab as either a democratic hero or a totalitarian dictator, corresponding to the rival epistemologies of modern society.