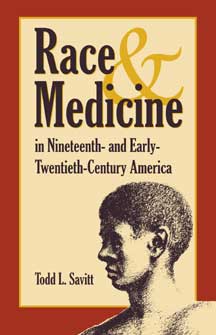 An examination of the medical experiences of African Americans

During the days of slavery in America, racism and often-faulty medical theories contributed to an atmosphere in which African Americans were seen as chattel: some white physicians claimed that African Americans had physiological and anatomical differences that made them well suited for slavery. These attitudes continued into the Reconstruction and Jim Crow eras.

In Race and Medicine historian Todd Savitt presents revised and updated versions of his seminal essays on the medical history of African Americans in the late nineteenth and early twentieth centuries, especially in the South. This collection examines a variety of aspects of African American medical history, including health and illnesses, medical experimentation, early medical schools and medical professionals, and slave life insurance.

With its new research data and interpretations of existing materials, Race and Medicine will be a valuable resource to those interested in the history of medicine and African American history as well as to the medical community.

Todd Savitt is professor of medical humanities and history at the Brody School of Medicine of East Carolina University and is the secretary/treasurer of the American Association for the History of Medicine.