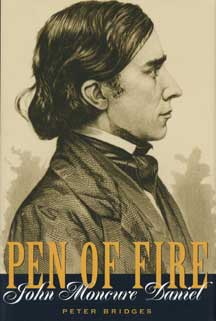 During his short and stormy life, John Moncure Daniel served as U.S. diplomat, journalist, Confederate officer, and conscience of the Confederacy.  Strongly pro-slavery, fiercely loyal to the Confederacy, and an outspoken opponent of Jefferson Davis, Daniel made many enemies and fought as many as nine duels.  Douglas Southall Freeman called him a strange blend of genius and misanthropy.

John Daniel became a leading Richmond editor and a force in the Democratic party by his early twenties.  President Franklin Pierce rewarded Daniel for his support in the 1852 campaign by making him American envoy to the kingdom of Sardinia at Turin.  There Daniel weathered serious scandals but won high praise for his reporting on Italy’s unification.  Daniel returned to Richmond after South Carolina seceded from the Union in December 1860.

Resuming editorship of the Examiner, he pushed successfully for the secession of Virginia (leaving the paper twice to serve as a Confederate officer) and attacked Jefferson Davis as timid, incompetent, and corrupt.  Wounded in 1864 in a duel with the Treasurer of the Confederacy, Daniel died in Richmond in March 1865, at age 39, just days before Union troops took the city.

This fascinating first biography of Daniel incorporates much new research, including correspondence between foreign ministers in Turin and their envoys in Washington and a series of private letters between John Daniel and his great uncle Peter Vivian Daniel of the U.S. Supreme Court, U.S. Secretary of War John Floyd, and others.  Pen of Fire fills a gap in general American historiography, in published works dealing with nineteenth-century American diplomacy, and in studies of the Civil War.

Peter Bridges holds degrees from Dartmouth College and Columbia University. A retired Foreign Service officer, his Safirka: An American Envoy (The Kent State University Press, 2000) relates his experiences as American ambassador to Somalia. Pen of Fire: John Moncure Daniel (The Kent State University Press, 2002) is the biography of the most influential Confederate editor during the Civil War. Bridges has published more than seventy articles and essays that deal mainly with history and foreign affairs.