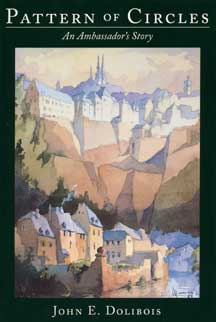 Pattern of Circles is a success story, for its author and his country.  John E. Dolibois was born December 4, 1918, in Luxembourg.  His mother died weeks later, and he was raised by an older sister until she left for Akron, Ohio, with her American husband.  In 1931 John came to Akron with his father and thus began a fascinating life journey.

He graduated from Miami University in 1942, in time for service as an Armored Force officer and then in Military Intelligence.  In this latter station he assisted in the interrogation of the Nazi war criminals prior to the Nuremberg trials.  His descriptions of Goering, Doenitz, Ribbentrop, et al. are perceptive, penetrating, and flavored with earthy humor.  These chapters are set against the backdrop of war, the Holocaust, and attendant horrors.

In 1981, after retirement from Miami University as Vice President for University Relations, Dolibois was called by President Ronald Reagan to become U.S. Ambassador to Luxembourg.  His appointment came fifty years to the day from his arrival in Akron.  His four years as ambassador are an appropriate chapter of life given to the service of his adopted country.

The defeat of Nazi Germany in 1945 brought with it the fall of a class of once powerful military commanders, government authorities and political henchmen who had formed the regime of Adolf Hitler.

Few U.S. intelligence officials came to know those men more intimately than did John E. Dolibois, who died May 2 in Wyoming, Ohio, at 95. His work as an interrogator was used in the war crimes trials at Nuremberg and provided insight into the psyches of the Nazi perpetrators.

Mr. Dolibois (who pronounced his name DOLL-ee-boy) came to the United States from his native Luxembourg as a boy and joined the U.S. Army during World War?II. He served briefly in a tank unit before his superiors realized that he spoke fluent German and that they could more effectively employ him in military intelligence.

After witnessing the horrors at the Dachau concentration camp, he found himself in Luxembourg at a hotel-turned-jail in the town of Mondorf-les-Bains. The prison was dubbed the Ashcan and housed many of the highest-ranking Nazi officials awaiting trial at Nuremberg.

Mr. Dolibois once told the Washington Times that he began to understand the nature of his job when he reported for duty at the prison and was informed that “to get in here, you need a pass signed by God and then somebody has to verify the signature.”

Mr. Dolibois retired to his room and was putting away his things when he heard a knock. Expecting to find a fellow officer, he recalled in interviews, he opened the door and saw Göring, whose considerable girth made him immediately recognizable. Mr. Dolibois described the former commander as “about 5 feet 10 inches tall and 5 feet 10 inches wide and bedecked with medals.”

“I did a very poor representation of an intelligence officer,” Mr. Dolibois once told a Wisconsin newspaper reporter. “I stood there with my mouth open.”

Göring asked whether Mr. Dolibois was a welfare officer stationed at the prison to ensure that the Geneva Conventions were respected. Mr. Dolibois was in fact an interrogation officer, he said in an oral history with the U.S. Holocaust Memorial Museum, but he declined to correct the reichsmarschall’s misunderstanding.

That decision — along with his fluency in German — helped Mr. Dolibois establish an extraordinary level of trust with many of the prisoners in the months preceding, in many cases, their conviction and imprisonment or execution.

“He fit right in,” said Greg Peterson, a founder of the Robert H. Jackson Center in Jamestown, N.Y., which documents the history of the Nuremberg trials. “He didn’t assert himself. .?.?. He asked, he listened and he gathered as much information as anybody possibly could in that environment.”

Mr. Dolibois recalled that the Germans divided themselves into three camps — military brass, civil servants and party leaders — and that interrogators successfully used the divisions to their own advantage.

“The only pressure we ever used,” Mr. Dolibois once told CNN, “was, ‘Well, look, if you don’t want to cooperate for your own good, we’ll just send you over to the Soviet Union. They have ways of getting information. Would you rather go there?’ ”

The tests produced revealing, sometimes disturbing results, said Eric Zillmer, a professor of psychology at Drexel University in Philadelphia and co-author of the book “The Quest for the Nazi Personality.”

Göring looked at an inkblot, laughed and said he saw two dancing figures clapping hands, according to Zillmer. Streicher identified a “flying dog from Borneo” and added that “it is also lifeless.”

By the end, Mr. Dolibois told the Cincinnati Enquirer, he had “seen enough prisons and prisoners.”

Jean Ernst Dolibois was born Dec. 4, 1918, in Bonnevoie, Luxembourg. His mother died shortly after his birth in the influenza epidemic.

With his father, a Frenchman, Mr. Dolibois came to the United States in 1931 and settled in Akron, Ohio, where a sister lived with her American husband. Mr. Dolibois was 12 at the time but said that he was placed in kindergarten because he did not speak English.

He later took the name John Ernest Dolibois and became a U.S. citizen. In 1942, he received a bachelor’s degree in psychology from Miami University in Oxford, Ohio.

Mr. Dolibois spent his postwar career at Miami University as an administrator and, among other endeavors, began a study-abroad program in Luxembourg. President Ronald Reagan nominated him in 1981 to be U.S. ambassador to Luxembourg, a post he held for four years.