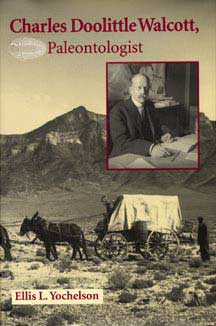 Charles Doolittle Walcott (1850–1927) is one of the most important and highly respected figures in the history of geology. This in-depth biography documents his career and life from birth to retirement from the U.S. Geological Survey in 1907, when he became Secretary of the Smithsonian Institution.

With very little formal education (he did not complete high school), Walcott became special assistant to James Hall, State Paleontologist of New York, and made a fundamental contribution to the study of trilobites by describing their limbs. He joined the new U.S. Geological Survey in 1879 and rose through the ranks to become its director in 1894, a position he held for 13 years. Walcott is known best for having documented in detail the “Cambrian,” the oldest richly fossiliferous rocks in the world. His primary efforts for the U.S. Geological Survey were in keying fossils to the sequence of rocks, and he brought new precision to the biostratigraphy of the older rocks of North America.

A talented and productive scientist, he also applied his talents to administration and made the USGS the most successful scientific organization in the world. At one time he was Director of the USGS, Chief of the Reclamation Service (effectively in charge of national forests), Secretary of the Carnegie Institution of Washington, and chairman of two committees appointed by President Theodore Roosevelt. The publication of his biography will serve to illuminate the life of an important but little-known American scientist.

“Ellis Yochelson leads us to a new, much deeper understanding of Charles D. Walcott and the institutions with which he was associated. He captures an era of geology that is gone, and in so doing may help educate modern readers about the goals and rigors of geoscience in the late nineteenth and early twentieth centuries.”—Kennard Bork, past editor of History of Earth Science