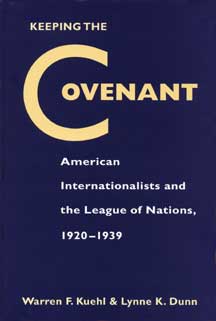 American Internationalists and the League of Nations, 1920-1939

Following the Senate rejection of U.S. membership in the League of Nations, diverse groups of American internationalists , led by an elite of scholars, philanthropists, publicists, and jurists, launched a campaign to reverse this defeat of their ideals. Keeping the Convenant traces the efforts of these dedicated internationalists during the interwar period. The individual and organizational efforts of league of Nations and World Court supporters, as well as those who supported the creation of friendship societies, religious ecumenism, international languages, and world citizenship are covered in rich detail. Analysis their disagreements and divisions, which prohibited a single, unified response in support of League of Nations membership, provides the central theme. Coauthored by Warren F. Kuehl and Lynne K. Dunn, Keeping the Covenant analyzes nearly twenty year of partisan political struggle and massive public opinion lobbying efforts.