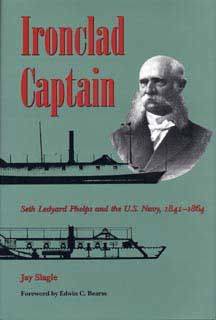 Seth Ledyard Phelps was of the Old Navy and the New.  As a midshipman and junior officer he served under sail off West Africa, in the War with Mexico, and in the Mediterranean and Caribbean.  As a senior office in the river squadrons of the Civil War he saw combat at its closest.

Phelps, a native of Chardon, Ohio, was a prolific and observant correspondent.  His private letters, to his wife, his father, and to political patrons and other naval officers, are among the most compelling and descriptive extant.

The heart of Ironclad Captain are these letters, which Jay Slagle has set in context through the judicious use of published documents, memoirs, and scholarly histories of the navy.  The result is a small history of the navy and its officer corps for the middle third of the nineteenth century.

Phelp’s self-confidence fueled a driving ambition.  He was one of the severest critics of the navy’s seniority system, which seemed to thwart those ambitions.  After long and often heroic service on the Western Rivers, he left the navy in 1864 to pursue a less exciting career in commerce and diplomacy.  Unfortunately for historians, his correspondence ends at that time as well.  Notwithstanding his bitter leave-taking Seth Phelps loved his country and his service.  His letters are a permanent and invaluable legacy to both.