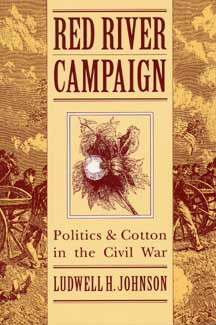 Politics and Cotton in the Civil War

First published in 1958, Red River Campaign examines how partisan politics, economic needs, and personal profit determined military policy and operations in Louisiana and Arkansas during the spring of 1864.

In response to the demands of Free-Soil interests in Texas and the New England textiles manufacturers’ need for cotton, Lincoln authorized an expedition to open the way to Texas.  General Nathaniel Banks conducted a combined military and naval campaign up the Red River that lasted only from March 12 to May 20, 1864, but was one of the most destructive of the Civil War.

“It is an ugly tale, and except piecemeal—in diaries, memoirs, and chapters in other books—has not been fully told. Ludwell H. Johnson’s book is thorough, scholarly, and moving. He goes into the complex of reasons, beginning with the annexation of Texas, that impelled men to employ shady means top attain decent ends. He goes into the Washington phase of the matter, especially Mr. Lincoln’s part in it, something until now unrevealed. . . . Johnson describes the fighting, dollying his camera nicely for close shots when he wants them, giving dreadful pictures of war.”
—James M. Cain, New York Times Book Review

“At a time when so much repetitious material is being produced on the Civil War era it is refreshing to read a monograph characterized by as much originality as this one. The book is well documented and thoroughly done,and the title is well chosen, since the narrative represents a careful intertwining of the play of military factors, cotton, and politics.”
—H. H. Simms, American Academy of Political & Social Science Annals

Ludwell H. Johnson is emeritus professor of history at the College of William and Mary and author of Division and Reunion: America, 1848–1877.