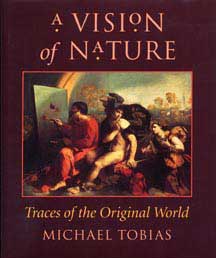 Traces of the Original World

For thousands of years humans have grappled with the idea of Nature.  This enduring question has left its poignant mark on a multiplicity of images, stories, works of art, and philosophical and religious systems.  In A Vision of Nature, Michael Tobias seeks to unravel the aesthetic, psychological, and philosophical impact that the Earth has had on humanity.  It is a dramatic and invigorating overview of the new field of ecological aesthetics.  Comprised of 10 autobiographical essays, A Vision of Nature is lavishly illustrated with art and images never before brought together in an ecological context.  The author examines the mystical links between Vivaldi, Giorgione, and Dosso Dossi and draws important parallels between the Age of Exploration and the rise of the “interior landscape” in the works of van Eyck and Vermeer.  Tobias examines the ancient cultures of the Mediterranean, the ascetics of Sinai and Tibet, and the Pure Land Buddhists.  He introduces the reader to the Jains of India, whose lifestyle is one of the most ecologically balanced in all of human history.  In profiling various artists of 19th century Europe and America, Tobias discovers incisive continuities among such luminaries as British poet Percy Bysshe Shelley, Austrian impressionist Emilie Mediz-Pelikan, and American intimist painters Ralph Blakelock and George Inness.  Tobias finds a common, transcendent instinct that affirms rebirth over destruction in the lives of explorer Francis Kingdon Ward, storyteller Hugh Lofting, philosopher Nikos Kazantzakis, and film character King Kong.  He concludes his lyrical investigations in the Antarctic, where he ponders the future of humanity and its role as caretaker of the Earth.  Ultimately, the survival of humankind and of all other species hinges upon our willingness to uphold and celebrate the truth, beauty, and very sanctity of Nature.