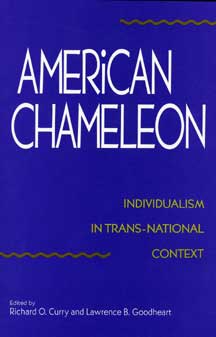 The concept of individualism that emerged in American society during the late 18th century has long defined America’s social, political, and economic institutions.  American Chameleon is the first historical work which addresses this concept and its multiple meanings, usages, and contradictions.

In this collection of 11 essays, individualism is placed in a comparative, trans-national context that differentiates the American national experience from its European cultural heritage.  The authors analyze meanings and usages of individualism in Europe—particularly France, Germany, and Great Britain—in order to clarify those found in American society.  Also examined are the limitations of the concept in relation to minority groups and women.  A 19th-century perspective of individualism is the central focus of American Chameleon, but the final chapter adds a contemporary dimension.  Editors and authors Richard Curry and Lawrence Goodheart herein offer scholars, students and interested citizens new interpretations and a deeper understanding of the past, present, and future of American society itself.