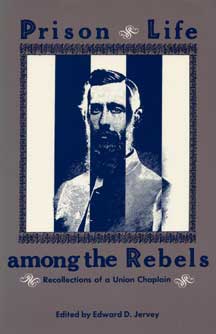 Prison Life Among the Rebels

Recollections of a Union Chaplain

Henry S. White, a chaplain attached to the Fifth Rhode Island heavy Artillery, was captured in May 1864 and remained a prisoner of war until the following September.  After his release he wrote a series of letters to Zion’s Herald, a New England Methodist newspaper, in which he described in vivid detail his capture and transportation to Andersonville and then to the officers’ prison in Macon.

The letters reveal White’s eye for detail and his keen interest in the state of affairs in the south.  He drew pointed comparisons between the officers and men of the two armies, and recounted the terrible lot of the prisoner of war.

“As a chaplain White was spared the worst horrors of Confederate prison life, but his experiences in Rebel custody…were harrowing enough.  Teen-aged sentries gleefully shot prisoners on the slightest provocation, or none at all, as the quickest way to earn a promotion.  Half-naked men driven insane by hunger, lack of shelter, and atrocious sanitary conditions pleaded with guards to put them out of their misery.  White spent only a day at Andersonville, yet his description of that earthly hell is thorough, concise, and very chilling.”—American Heritage