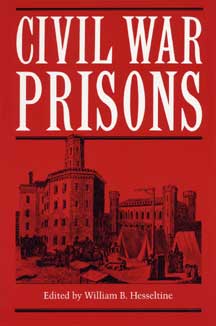 First published in 1962 as a special edition of Civil War History journal, Civil War Prisons remains the standard on the topic. Editor Hesseltine tackles the historiography of northern and southern prisons during the American Civil War. He attempts to bring closure to the legendary northern myth that the Southern government did its best to “exterminate” Union prisoners by calling the effective northern war propaganda a wartime “psychosis.” Furthermore, the author offers his analysis over the much debated prisoner exchange system, and comes down hard on the North, especially its government and General Ulysses S. Grant, for their questionable approach to this issue.

For all the serious scholarship and popular writing devoted to the American Civil War, the topic of prisoner-of-war camps, more than any other, retains the feeling of horror and passion that characterized the war years themselves, “Men held captive under such circumstances, guilty of no offense other than the deplorable misfortune of having been captured by the enemy, suffer tremendous psychological punishment as well as physical hardship.  Monotony, estrangement and fear, along with privation and often brutality, combine to create nearly as wretched a quality of human life as is imaginable.  The sufferings of Civil War prisoners (are) documented in this re-issue of an early number of the journal Civil War History ….Recounted there….are prisoner experiences in four Confederate installations: Andersonville, Georgia; Libby in Richmond, Virginia; Cahaba, Alabama; and Charleston, South Carolina.  The remaining articles treat conditions in four Union prisons:  Fort Warren in Boston harbor; Rock Island, Illinois; Elmira, New York; and Johnson’s Island on Lake Erie….in addition to some examples of sparkling and vivid prose, this volume contains a number of excellent photographs as well as an introduction by the late William B. Hesseltine….”—Kenneth B. Shover, The Historian