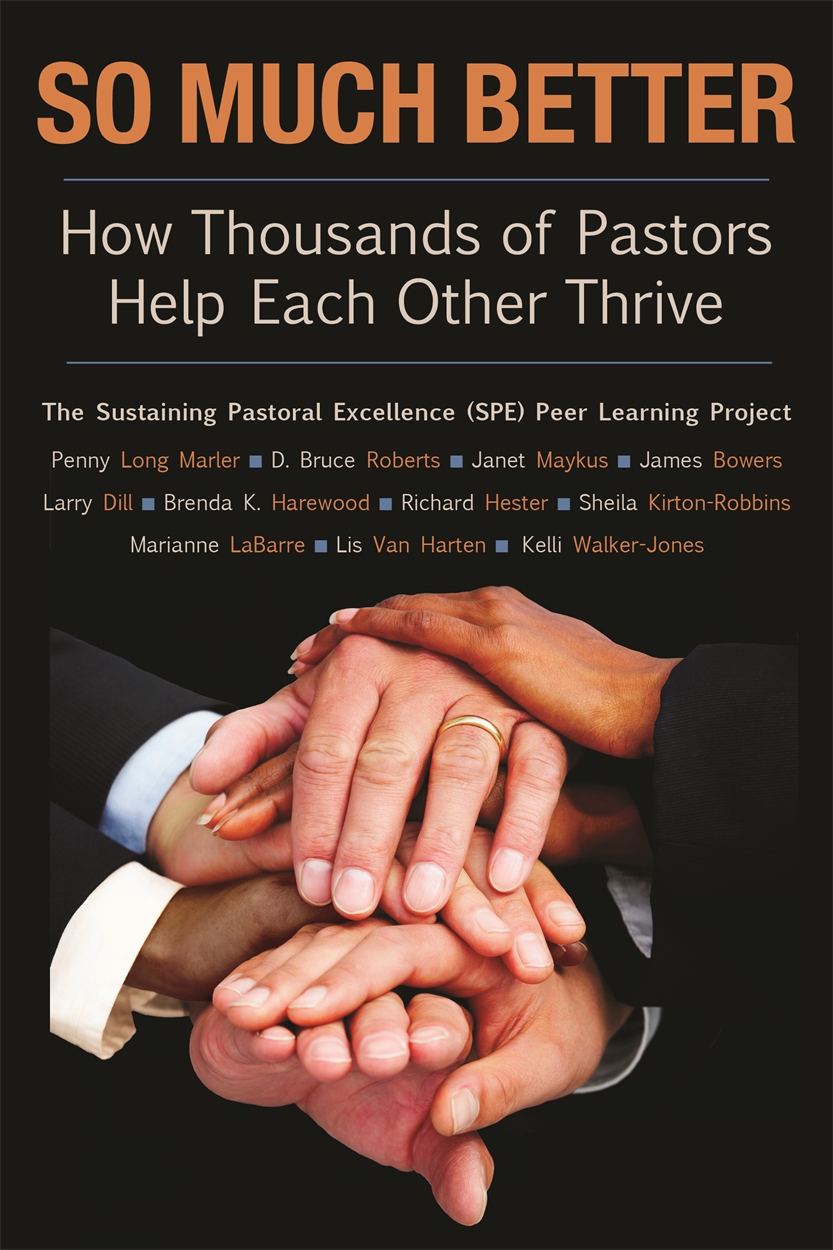 How Thousands of Pastors Help Each Other Thrive

This book goes beyond numbers and data by breathing life into the statistical bones. At this book's heart are seven peer group models including stories and examples from participants, families, and church members. Also featured is information about peer group recruitment, leadership, content, and structure, and practical advice about the cost, sustainability, and evaluation of peer groups.

So Much Better can change the way you think about and perform your ministry and lead you to a life that is— well, so much better.

Penny Long Marler is professor of religion at Samford University in Birmingham, Alabama. She was the project director of the Resource Center for Pastoral Excellence at Samford (2003-2008) and co-principal investigator of a study of the effects of clergy peer groups funded by the Lilly Endowment, Inc. (2007-2010). She is a coauthor of two books, Being There: Culture and Formation in Two Theological Schools and Young Catholics at the New Millennium: The Religion and Morality of Young Adults in Western Countries, and many articles and essays. Penny is also a church consultant and directs Samford's undergraduate concentration in congregational studies.

D. Bruce Roberts is professor emeritus of congregational education and leadership and served as director of the Indiana Clergy Peer Group Study Program at Christian Theological Seminary. He is coeditor with Robert E. Reber of A Lifelong Call to Learn: Approaches to Continuing Education for Church Leaders and author of articles on congregational leadership and adult education. As a United Methodist pastor, Bruce served churches in Delaware and Massachusetts. He was a member of the research team studying the effects of clergy peer groups funded by the Lilly Endowment, Inc.

Janet Maykus was the principal of the College of Pastoral Leaders at Austin Presbyterian Theological Seminary in Austin, Texas and co-principal investigator of a study of clergy peer groups funded by the Lilly Endowment, Inc. Currently she is the director of church relations for Texas Christian University and the director of the HELM Leadership Fellows, a program of the Higher Education and Leadership Ministries of the Christian Church (Disciples of Christ).

James Bowers served as vice president for Academics and executive director of the Center for Pentecostal Leadership and Care at the Pentecostal Theological Seminary in Cleveland, Tennessee since 2004. James is also associate professor of Christian formation and pastoral leadership and pastored churches in Kentucky, Virginia, Alabama, and Georgia. James's current interests include Pentecostal spirituality and social justice, empirical theology, and emerging alternative models of teaching.

Larry Dill is the executive director of The Institute for Clergy Excellence, a Sustaining Pastoral Excellence Project based in Huntsville, Alabama. Prior to 2003, Larry served as a United Methodist pastor of rural, suburban, new church, urban transitional and large membership congregations. A strong believer in encouraging adults to take charge of their own learning, Larry is zealous about working with clergy in small groups.

Brenda K. Harewood has been the director of the Lott Carey Pastoral Excellence Program since 2003. She is also the Lott Carey Regional Liaison for the Caribbean and South America and currently serves on the Commission for Theological Education and Leadership Formation of the Baptist World Alliance. Brenda is an ordained Baptist Minister and has served as a pastor of the Guyana Missionary Baptist Churches.

Richard Hester co-directed with Kelli Walker-Jones the Narrative Leadership Project at Triangle Pastoral Counseling, Raleigh, NC (2002-2009). Based on this experience they coauthored the book Know Your Story and Lead with It: The Power of Narrative in Clergy Leadership. Dick is a pastoral counselor on the center staff. His teaching and leadership posts include: Executive Director of the Georgia Association for Pastoral Care, Atlanta, GA (1991-1993); Professor of Pastoral Theology at Southeastern Baptist Theological Seminary (1975-1991) and at Phillips Theological Seminary, Enid, Oklahoma (1970-1975). He practices narrative therapy and conducts annual eight month narrative therapy seminars for therapists since 1997.

Sheila Kirton-Robbins has been program manager and director of research of the Lott Carey Pastoral Excellence Program since 2003. She is a coauthor of "Movers and Shakers: How and Why Women Become and Remain Engaged in Community Leadership," an article published in the Psychology of Women Quarterly.

Marianne LaBarre has been the Director of the Pastoral Leadership Program at the School of Theology and Ministry since 2003. A faculty member at Seattle University since 1986, Marianne served for more than a decade as director of the Master of Divinity and spiritual formation for the school. Following her doctoral work in leadership, she was a founding member and director of the Interdisciplinary Executive Leadership Program at the university. Marianne is a spiritual director, spiritual coach, and the author of God Knows Your Job Gets Old: 12 Ways to Enliven It and numerous articles on coaching and leadership.

Lis Van Harten has been with the Sustaining Congregational Excellence and Sustaining Pastoral Excellence programs at the Christian Reformed Church in North America in Grand Rapids, Michigan since 2003. She is currently the director. Lis is passionate about encouraging and supporting pastors, pastors' spouses, and congregations. Being both an active layperson and pastor's spouse, she relates well to ministers and their families. This is her first published work.

Kelli Walker-Jones is center director at Triangle Pastoral Counseling in Raleigh, North Carolina. From 2002 to 2009 Kelli and Dick Hester co-directed the Narrative Leadership Project at Triangle Pastoral Counseling and coauthored the book Know Your Story and Lead with It: The Power of Narrative in Clergy Leadership. She is an ordained elder in the United Methodist Church. Kelli has served as minister in small rural churches, in a large, suburban multi-staff congregation and on the staff of Duke University Divinity School.