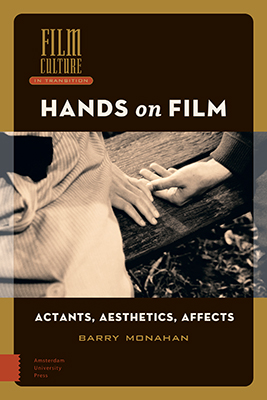 Hands on Film is a comprehensive study of the representations and on-screen uses of the human limb, spanning the history of the cinema from its birth to contemporary times. It examines how filmmakers have framed the hand for a variety of effects, from stylistic to thematic, and for the development of characterisation and narrative. The book offers insights into how films have created meaning by focusing on that part of the anatomy and, in turn, proposes a variety of ways in which its on-screen appearances might shed light on what it means to be sentient, cultured, and creative beings in the world.

Barry Monahan lectures in the Department of Film & Screen Media at University College Cork. He researches and has published in Irish and other national cinemas from historical, theoretical, and aesthetic perspectives. His monographs include Ireland’s Theatre on Film: Style, Stories and the National Stage on Screen (Irish Academic Press, 2009), and The Films of Lenny Abrahamson: a filmmaking of philosophy, published by Bloomsbury in 2018.