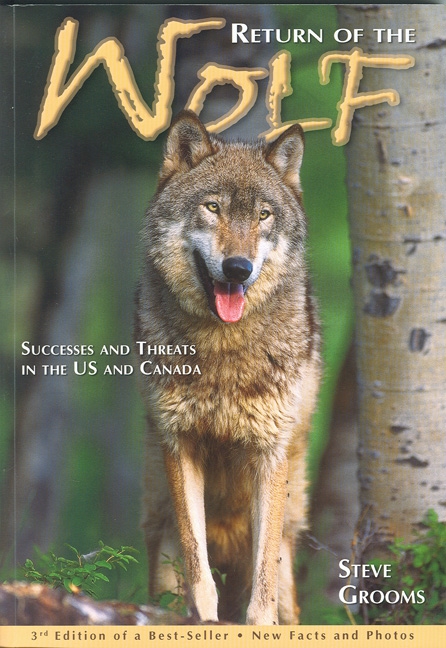 Return of the Wolf- 3rd Edition

Successes and Threats in the U.S. and Canada

Considered the best single book on both wolf biology and politics, this award-winning best seller is balanced, informed, yet sympathetic. Stunning color photos and lyrical writing combine wisdom about wolves with candor about wolf management controversies. It sold 50,000 copies in its first two editions; won the Skipping Stones Award for nature education in 2000; has been used as a textbook; earns 5 stars on Amazon.com. A new chapter on Canada, stunning new color photos mostly shot in the wild rather than in pens, and larger page format make it a new treasure. Steve Grooms is respected worldwide for his 13 books in the Nature category.

Steve Grooms has been studying and writing about wolves since 1977. From 1976 through 1981 he was managing editor of Fins and Feathers Magazine. He is the author of 13 books on pheasant hunting, outdoor philosophy and humor, natural history, fishing and fishing boats, trophy deer, health, cooking - even a memoir. Earlier editions of Return of the Wolf won endorsement from the National Wildlife Federation; it appeals to the general public but has also been used as a textbook. Steve is a member of the International Wolf Center and serves on the Center's magazine committee. He lives in St. Paul, MN and has spotted five wolves on his way to his cabin in Cornucopia, WI.Main photographer Michael H. Francis, trained as a wildlife biologist, is a wildlife photographer based in Montana. His photography has been internationally recognized for its beautiful and informative imagery. Michael's work has been published by the National Geographic Society, The Audubon Society, The National Wildlife Federation, as well as by Field and Stream, Outdoor Life, and Sports Afield magazines, among others.

Other Titles from Nova Vista Publishing