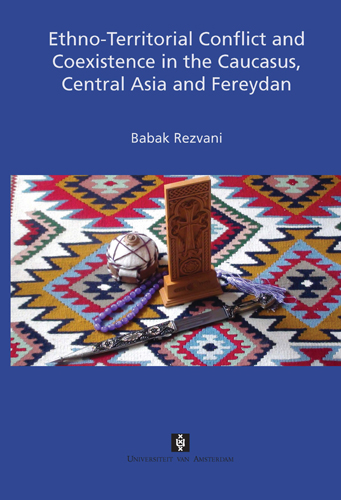 Ethno-Territorial Conflict and Coexistence in the Caucasus, Central Asia and Fereydan

‘Few authors have such an intimate knowledge of the background of conflicts in Central
Asia. Rezvani looks at the region from a fresh perspective. He arrives at highly
relevant recommendations how the politicization of ethnicity can be avoided and how
ethnic nationalism in the long run can be turned into civic nationalism.’
Gerd Junne: Emeritus Professor of International Relations, University of Amsterdam.

‘It is rare to find such a thorough study about identity/culture and territory/geography
in the troubled regions of Central Asia, the Caucasus, and Iran, and it is even more
rare to find a comparative analysis. This book is encyclopedic and thought-provoking
at the same time.’
Ton Dietz: Director of African Studies Centre, Leiden University, and Guest Professor
of Human Geography, University of Amsterdam.

‘In contrast to much other research on conflict between ethnic groups, Rezvani has
not only focused on the conflicts and their origins but also included the set of situations
where a conflict could have erupted but failed to occur. _ is provides a useful
correction to stereotypes of “conflict-prone” regions, particularly in the Caucasus and
Central Asia.’
Gertjan Dijkink: Associate Professor of Political Geography, University of Amsterdam.

‘Babak Rezvani’s well-written and systematic work focuses on ethno-territorial and
demographic aspects of conflict, combining theory with case studies and statistical
analysis. He not only provides an innovative and interesting contribution to his field
of study but also demonstrates a detailed knowledge of the relevant literature. The
book is extremely well-sourced and offers a deep and insightful history of the areas
and conflicts concerned.’
Georg Frerks: Professor of Conflict Prevention and Conflict Management, Utrecht
University, The Netherlands.