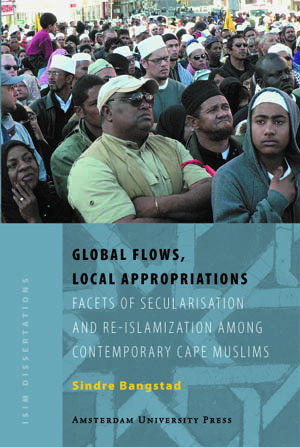 Facets of Secularisation and Re-Islamization Among Contemporary Cape Muslims

Global Flows, Local Appropriations; Facets of Secularisation and Re-Islamization Among Contemporary Cape Muslims is the first ethnographic study of muslims in Cape Town, South Africa at this level in 25 years. It explores processes of secularisation and re-islamization among Cape Muslims in the context of a post-apartheid South Africa in which liberal and secular values have attained considerable purchase in the new political and social elites. Fractured by status, ethnicity and religious orientation, Cape muslims have responded to these changes through an ambiguous accomodation with the new order. This study explores this development through chapters on conversions to Islam among black Africans in Cape Town, Cape women's experiences with polygyny, Cape muslims and HIV/AIDS, the status of Islam in a prison Cape Town in the post-apartheid era and on contestation over rituals among Cape muslims.

Sindre Bangstad has been engaged in ethnographic research on Cape muslims since 1998. He graduated with a cand.polit. degree in Social Anthropology from the University of Bergen in Norway and has been a PhD Fellow at International Institute for the Study of Islam in the Modern World (ISIM) in Leiden since 2003.