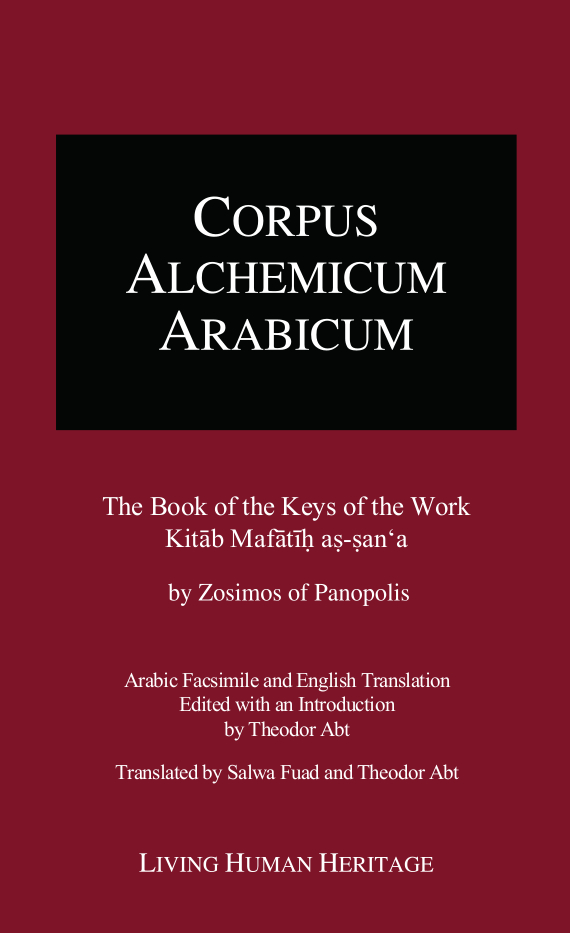 CALA III: The Book of the Keys of the Work, Kitab Mafatih as-san’a by Zosimos of Panopolis

From the Introduction of the editor:

The manuscript of Zosimos's Kitab Mafatih as-san'a (The Book of the Keys of the Work), here presented as a facsimile together with an English translation, makes this document accessible in a Western language for the first time. Although the scientific community has known of this book for almost a century, it has up to now remained difficult to obtain for study purposes. Yet this text is crucial for the history of alchemy and especially for a better understanding of the origins and the significance of symbolic alchemy, as will be demonstrated in the following. […] At the beginning of the Kitab Mafatih as-san'a we read: «Zosimos, when he wrote about these treatises to Theosebeia, named them The Keys of the Work, and the completer (hatim) of what had been extracted as essence from its sciences. They (the ten keys) are for Theosebeia; it is the last thing that he wrote for her. And when she came across it, she understood the work.» On the basis of arguments collected in the introduction to this book, one can conclusively say that it is a translation from a Greek original, and it can be considered as Zosimoses summa, the very essence of his teachings.

Theodor Abt (1947), born in Zurich, Switzerland; Ph.D. from the Federal Institute of Technology (ETH) in Zurich 1977, 1973-79 project leader of overall regional development concepts for two Swiss mountain regions. Since 1975 Jungian Analyst in private practice. 1983-88 member of the board of the C.G. Jung Institute, Zurich. Since 1990 Professor for Rural Sociology at the ETH. Since 1995, member of the board of the Research and Training Centre for Depth Psychology according to C.G. Jung and M.-L. von Franz, Zurich. Since 1988, President of the Society of the Friends of the Royal Tombs of Egypt. His research focuses on the relationship of the outer world with the needs of the inner unconscious world. Together with Wilferd Madelung he is editor of the Corpus Alchemicum Arabicum (CALA) series. Of his publications in German is available in English: Progress without Loss of Soul, 1990 and Dark Clouds over Europe, 2014.n.a.