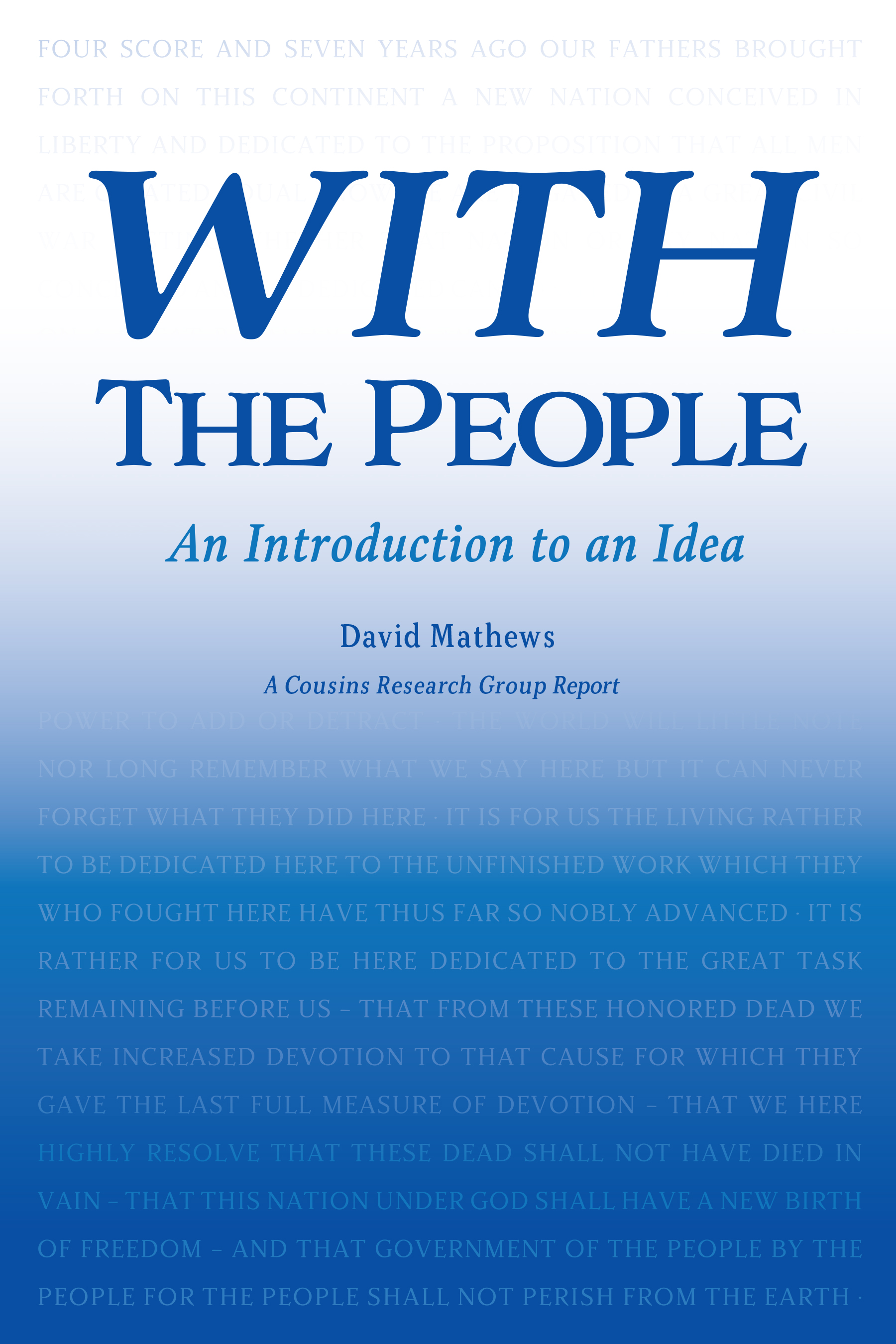 With the People: An Introduction to an Idea

In 1863, President Abraham Lincoln delivered his Gettysburg Address, and he spoke of an ideal of government, one that is of, by, and for the people. Do Americans today think our government is really “of” the people? That's debatable. “By” the people? Doubtful. “For” the people? Perhaps for some, sometimes.

This Cousins Research Group Report, based on a forthcoming book by David Mathews, suggests trying another preposition—government with the people. It offers a strategy for bridging some of the divide separating the people of the United States from their government and from the country's major institutions. It envisions a form of collaboration that would have institutions working with citizens, not just for them. Such a “with strategy” sees people as creators and producers rather than consumers or clients. It encourages collaboration through mutually reinforcing efforts between the citizenry and the government, and that could have a cumulative effect on the troubles that our democracy faces.

David Mathews is president and CEO of the Kettering Foundation, a nonprofit research foundation rooted in the American tradition of invention. Prior to his work with the foundation, Mathews served as Secretary of Health, Education, and Welfare in the Ford administration. From 1965 to 1980, he taught history at the University of Alabama, where he also served as president from 1969 to 1980. Mathews earned an AB degree in history and classical Greek. After graduating Phi Beta Kappa from the University of Alabama, he received his PhD in history from Columbia University. Mathews has served on the boards of a variety of organizations, currently including the Gerald R. Ford Foundation, National Issues Forums Institute, Southern Institute on Children and Families, and Public Agenda. He has received numerous awards, and in 2007, the Alabama Center for Civic Life was renamed in his honor. He is also the recipient of 17 honorary degrees. Mathews has written extensively on Southern history, public policy, education, and international problem solving. His books include Politics for People: Finding a Responsible Public Voice, Reclaiming Public Education by Reclaiming Our Democracy, and The Ecology of Democracy: Finding Ways to Have a Stronger Hand in Shaping Our Future. Mathews is married to Mary Chapman Mathews, and they have two daughters and six grandchildren.