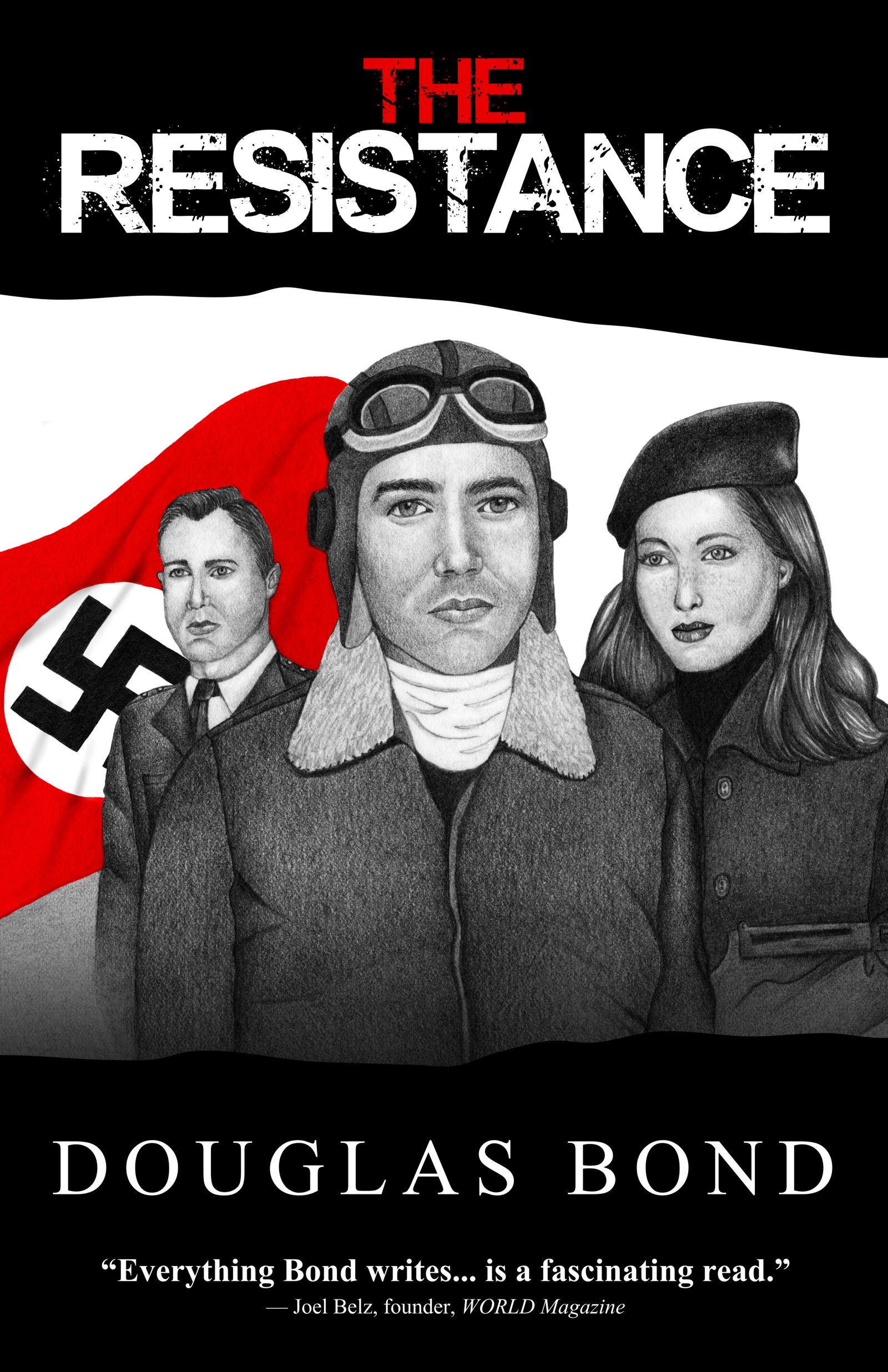 Lt. Eli Evans, B-17 bomber pilot, is shot down over enemy-occupied France in 1944. Surrounded by Resistance fighters, a licensed-to-kill SOE British agent, and Marxist sympathizers, Evans and his navigator must evade a ruthless Nazi manhunt if they are to survive. Resistance sympathizer Aimée hates war but is forced to act with courage, risking her life for others. Engaged in ambush and sabotage, the combatants will debate broadcast talks by C. S. Lewis, heard as they listen to the BBC for coded messages from London. Full Review True to form, Douglas Bond delivers yet another historical novel sure to capture the hearts and imaginations of both the young and the old. Readers will thrill at the high-stakes, fast-paced cat and mouse game that ensues among downed Army Air Corps pilot Eli Evans, navigator Charlie Tucker, and the Waffen SS. The timing of events and diversity among the characters kept the tension hovering at or above an 8 on a 0-10 scale. From the moment the B-17 crashes, until the invasion of Normandy; time (and pages) seemed to fly by. I've read a number of books recounting the events leading up to D-Day, but this one provided a unique perspective. The cast of American aircrew, French Resistance, Communist sympathizers, along with the SOE operative, lent to a wide range of viewpoints on politics, religion, and the best plan of action for the team. One of the reasons that navigator Charlie “Chuckles” Tucker was my favorite character is because he could be counted on to break the tension of any given circumstance. Chock-full of historical facts, this novel will make another wonderful addition to our homeschool library. Not only this, but our son has already read War in the Wasteland, where he was introduced to a young atheist, Clive Staples Lewis. When he picks up this novel he will be able to recognize the transformative power of the Holy Spirit in the life of C.S. Lewis through his BBC radio transmissions.

Douglas Bond is author of more than twenty-five books of historical fiction, biography, devotion, and practical theology, including several books now in Dutch, Portuguese, and Korean. Two-book Grace Award finalist (The Revolt and The Battle of Seattle, 2016), Bond directors the Oxford Creative Writing Master Class, is adjunct instructor in church history and creative writing at three institutions of higher learning, and leads Church history tours in Europe. Married to his wife Cheryl since 1983, they have been blessed with six children and four grandchildren. ​ He is adjunct Instructor in Church History at Western Reformed Seminary (WRS) where his Church history tours can be taken for graduate elective credit. Along with the Oxford Creative Writing Master class, his church history tours can be taken for university level credit at New College Franklin. Bond has earned a Masters in Teaching (MIT) from St Martin's University, and a Preliminary Certificate in Theology from Moore Theological College, NSW Australia. ​ He has taught English and history for many years, and was awarded by the Pierce County Library Foundation and Arts Commission the "2005 Teacher Award" for teaching young adults how to write; his high-school-aged writers have consistently dominated local and regional writing contests, including a 1st, 2nd, and 3rd place sweep of the three-state and British Columbia Optimist 2015 essay writing contest; the Optimist Club awarded Bond the 2015 "Teacher of the Year." Bond frequently speaks on writing at various conferences. Additionally, Bond has ministered overseas in Peru, and taught in the Kingdom of Tonga, and with Equipping Leaders International (ELI) in Uganda. He is on the advisory board of Glorious Films (Montreal) with Derek Thomas, Michael Haykin, and others (2014). In the Psalms Project (2009), funded by the Lilly Foundation, Bond was selected to be a speaker at Union University and to contribute a chapter to the book Forgotten Songs. As a hymn writer and author of several books on hymn writers and hymnody, Bond was asked to be a consultant for the Canadian Broadcasting Corporation's (CBC) special feature series on Christian hymns, God's Greatest Hits (2012). His NEW REFORMATION HYMNS album with Greg Wilbur and Nathan Clarke George released in 2017; a growing number of his hymns are being sung in churches and at conferences. Bond is a ruling elder in the PCA, has served on a Presbytery committee, and in 2015 was elected to the permanent committee which oversees the campus ministry Reformed University Fellowship (RUF); he now serves as an advisory member to the RUF Permanent Committee in Atlanta, GA. As an outgrowth of his books and teaching, Bond has led church history tours in Europe since 1996, and has also been consulted on a history documentary film on the Reformation. Meridian Filmworks is in negotiation with Bond’s publisher to create a major motion picture of his Scottish Covenanter signature novel Duncan’s War. Frequently interviewed on Christian radio stations, Bond was featured in French newspaper Le Midi Libre (1/18/2015) on his book HAMMER OF THE HUGUENOTS, researched and written on-location in France. Additionally, Bond's articles on church history and theology have appeared in Modern Reformation, Table Talk, byFaith (author interview), Western Reformed Seminary Journal, Light and Life magazines, and in the Aquila Report. In addition to leading church history tours, Bond often lectures at conferences on literature and church history, including speaking at several Ligonier West Coast Conferences.