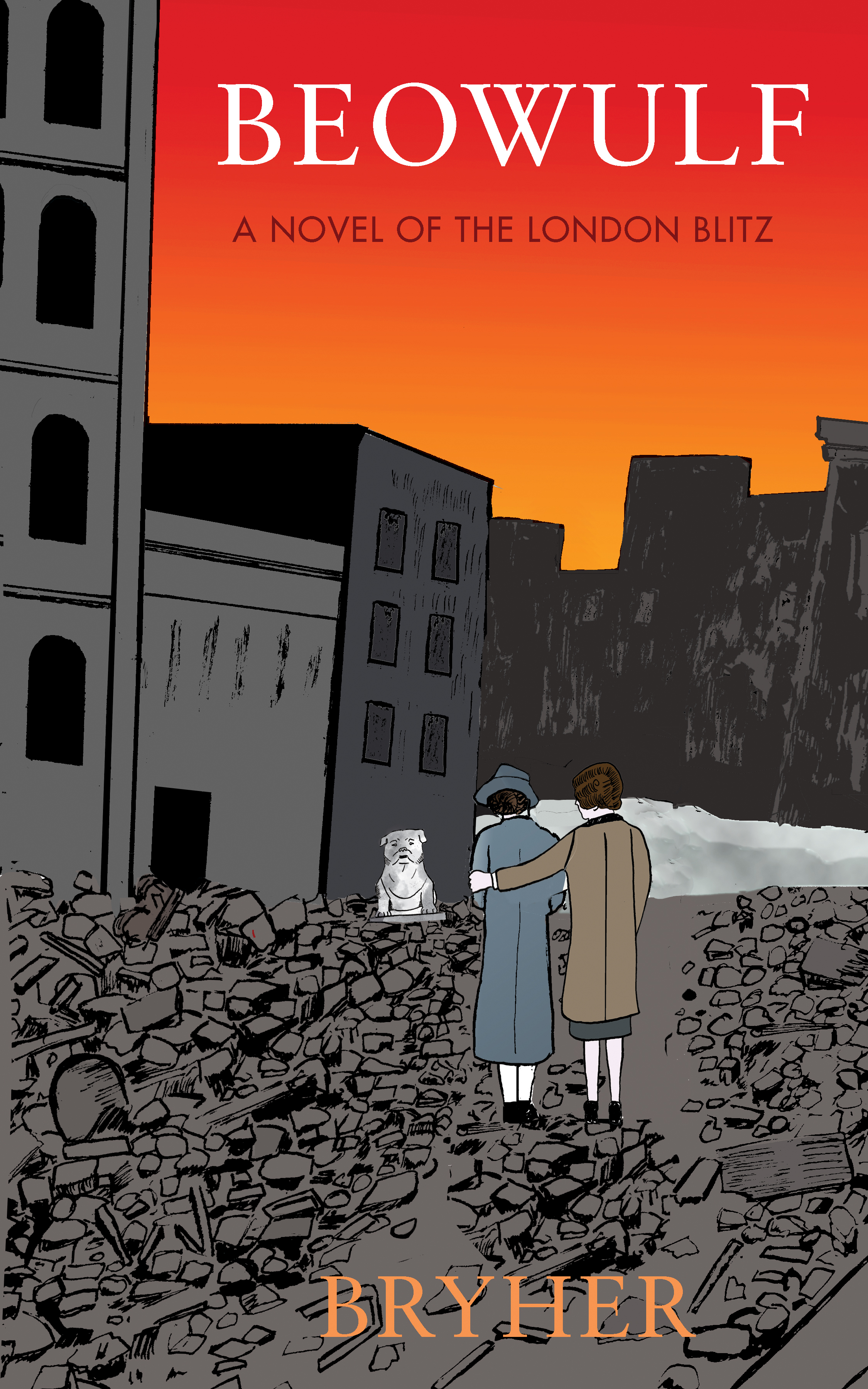 A Novel of the London Blitz

Eighty years ago, the city of London became the target of a relentless bombing campaign by Nazi Germany during WWII that has come to be known as the Blitz. From the period between 1940-1945, over 20,000 Londoners were killed and half a million lost their homes. Bryher, who lived through a good part of those years in London, has provided us with an indelible portrait of day-to-day life from a variety of voices and perspectives from its regular citizens, humanizing the political backdrop of war with their pluck, humor, endurance, and courage. Her two female protagonists who own and operate the local teashop,The Warming Pan, become the heroes of the novel as they work to provide food and hospitality to the embattled community. The Beowulf of the title, far from the epic hero of the fundamental Anglo Saxon legend, is the name of the teashop's mascot: a plaster sculpture of a bulldog that they discover in the rubble after a heavy bombing raid that they make the centerpiece of their cafe. It becomes a symbol in turn for the fortitude and patient suffering of those innocent civilians caught in the maelstrom of war. Certain to appeal to all fans of WWII fiction, Beowulf is an unforgettable reminder of what it was like during that crucial time in Britain's and the world's history.

Bryher, née Winifred Ellerman, (1894-1983) was an author, philanthropist and activist who published several historical novels, of which Beowulf is the first, originally published in France in 1948 and subsequently in English in 1956 by Pantheon Books. Her other historical novels include The Roman Wall, Coin of Carthage, and The Player's Boy, as well as two memoirs, A Heart to Artemis and Days of Mars. She adopted the name Bryher after an island off the coast of England in order to disguise her gender as a writer. In addition to her own work, Bryher was best known as the lifelong companion of the imagist poet H.D.. Lesser known is the fact that before and during World War II, Bryher assisted a great number of artists, writers and psychologists to escape from Nazi-held territories, among them Sigmund Freud, Thomas Mann, Walter Benjamin, Max Ernst, and many others. She also wrote and co-directed with her husband Kenneth Macpherson the avant garde silent film "Borderline," that starred Paul Robeson and H.D. Bryher and MacPherson co-founded the first english-language publication devoted to film criticism and theory, "Contact." She lived in Vevey, Switzerland. Susan McCabe was born in 1960 on Sunset Boulevard in Los Angeles, and has taught in Oregon and Arizona, and received her PhD at UCLA. She also taught and conducted research in her mother’s country of Sweden. She directed the PhD in Literature and Creative Writing Program (2006-2009), and has been President of the Modernist Studies Association. She is the author of four books, including two critical studies—Elizabeth Bishop: Her Poetics of Loss (Penn State University Press, 1994) and Cinematic Modernism: Modern Poetry and Film (Cambridge University Press, 2005)—and two poetry volumes, Swirl (Red Hen Press, 2003), and Descartes’ Nightmare (winner of the Agha Shahid Ali prize and published by Utah University Press in 2008). She is author of the upcoming dual biography: H.D. and Bryher: A Modernist Love Story, to be published by Oxford University Press.