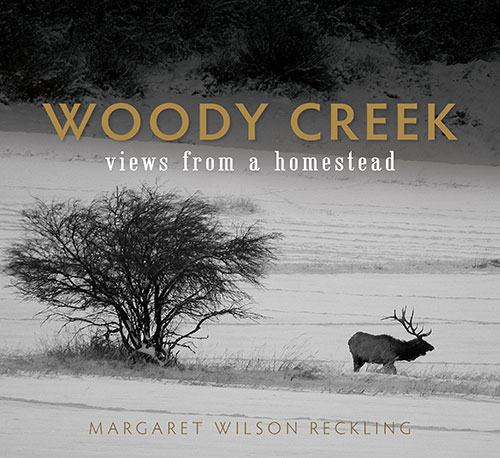 Views from a Homestead

When Margaret Reckling traded life in a major metropolis for a remote ranch in the mountains outside Aspen, she soon discovered that beyond initial impressions of reclusive celebrity and eccentric artists Woody Creek has a deeper story that often goes unrecognized by tourists and part-time residents. Early homesteaders moved to Woody Creek to support mining activities in nearby Aspen when it was still Ute Territory, and their resilience and respect for the land remains part of the community's character today. Living in a homestead that belonged to one of these families, Reckling travels in their footsteps during her summer irrigation rounds, experiences the same variable mountain weather that they endured, and rests her weary head at night within four walls built by their hands. When the winter wind swirls around her sturdy ranchhouse and stacks snow against its sides, she knows that they too heard that same fierce howl and wondered what the morning light would reveal.

In Woody Creek: Views from a Homestead, Reckling captures the essence of this place. With her skills of close observation and patience forged by long solitary mountain winters, she creates stunning images—intimate and panoramic—of its visual riches: the handiwork of early ranchers and farmers, the sensory overload of the changing palette of the seasons, the habits and habitats of both prey and predators. From the smallest wildflower to the tallest snow-clad peak or the brightest harvest moon, this collection of images conveys the deep mysteries of the Woody Creek terrain and the way of life that the free spirits who live here have preserved with an astounding resoluteness.

Margaret Wilson Reckling was born in Beaumont, Texas, and grew up in Houston. A graduate of The University of Texas, she is a published poet and an award-winning photographer. Published in national magazines, she is also a former columnist for the Aspen Times newspaper. An avid outdoorswoman, she frequently travels abroad: hiking, trekking, skiing, and fly-fishing. Margaret's wanderlust is also fueled by her passion for history and culture. Closer to home, she searches for ancient pictographs and petroglyphs in remote places across the American West. Over the past five years, Margaret has managed and restored an original Colorado homestead ranch, an experience which has been a major inspiration for Woody Creek: Views from a Homestead.