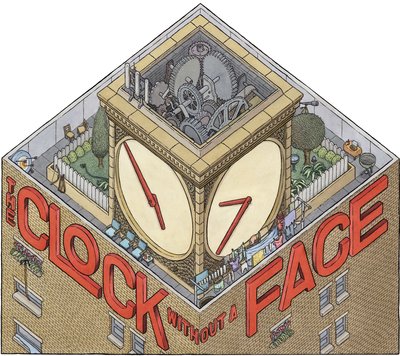 The Clock Without a Face

We’ve buried 12 emerald-studded numbers?each handmade and one of a kind?in 12 holes across the United States. These treasures will belong to whoever digs them up first. The question: Where to dig? The only path to the answer: Solve the riddles of The Clock Without a Face!

THE BOOK
The call comes in from the shadowy Ternky Tower: 13 robberies, one on each floor, all the way up to the penthouse, where obnoxious importer Bevel Ternky has been relieved of the numbers garlanding the legendary Emerald Khroniker, his priceless, ancient clock. Readers must conduct their own investigations, scouring detailed illustrations for hidden clues and knotty puzzles. All your answers can be found within this book: whodunit and how? and where the real numbers are buried now.

THE NUMBERS
Twelve?and only twelve?emerald-bedecked integers sleep somewhere in this nation’s soil. If you can find them, they’re yours to keep?and only this book can tell you where they are. So read the story carefully, and examine the illustrations closely. The race is on!

Augustus Twintig was born in 1952 in the town of Dutch Oven, Pennsylvania, where his family ran a successful funnel-cake restaurant. He is the author of Mallow Me, Mallow You: A Year in the Marsh (a guide to rural confectioneries), and is a member of the Guild of Podiatric Investigators.

Eli Horowitz has edited and designed books and journals for McSweeney's for the past eight years. Before McSweeney's, Eli was employed as a carpenter and wrote science trivia questions tenuously linked to popular films. He was born in Virginia and now lives in San Francisco.

Mac Barnett is the author of Billy Twitter's Blue Whale Problem, Guess Again?, and the Brixton Brothers series. Born to non-farmers in a California farming community, Mac now lives near San Francisco. He's on the board of directors of 826LA, a nonprofit writing center for students in Los Angeles, and he founded the Echo Park Time Travel Mart, a convenience store for time travelers.

Scott Teplin lives and works in New York City. His work has been included in exhibitions at the New Museum, the Drawing Center, the Bronx Museum, the Museum of Arts & Design, the Brooklyn Museum of Art and several shows at P.S. 1. His hand-bound books are included in the collections of MoMA, SFMoMA, the Smithsonian, the Walker Art Center, Harvard University, Yale University, and the New York Public Library. He currently exhibits with g-module in Paris and the Adam Baumgold Gallery in New York.