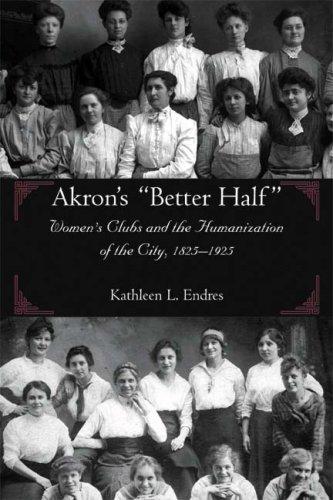 While the men of Akron busied themselves laying the economic, legal, and industrial foundations, their mothers, wives, sisters, and daughters were equally busy weaving the benevolent and cultural fabric of the growing city. It was a pattern replicated in scores of industrial centers across the nation. This is the story of how it happened in Akron, Ohio. Akron's "Better Half": Women's Clubs and the Humanization of the City, 1825-1925 looks at how women brought much-needed services to the city, created health institutions that continue today, and built Akron's cultural and literary foundations. Akron's women seldom acted alone; they preferred to work with like-minded women through clubs, organizations, and societies, some of which still survive today. This book covers the first 100 years of Akron's history, a time of enormous growth and change in the city. It was also a time of enormous energy and activism on the part of the women's clubs. It is a different perspective on the city, its history, and its institutions.

Kathleen L. Endres is Distinguished Professor of Communications at the University of Akron. She has a B.A. in English and an M.A. in Journalism from the University of Maryland, and a Ph.D. in American History from Kent State University. She is the recipient of numerous awards, most recently the Maurine Beasley Award for Outstanding Research in Women's History from the American Journalism Historians Association. Her previous historical works include Rosie the Rubber Worker and Akron Women.