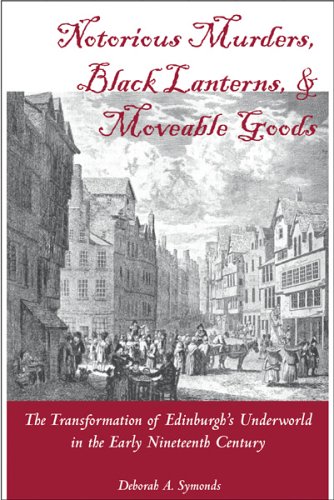 The Transformation of Edinburgh's Underworld in the Early Nineteenth Century

The year 1828, when William Burke, William Hare, and their wives murdered nearly a score of Edinburgh's poor and sold their bodies, offers us many more examples of entrepreneurial criminals in Edinburgh's Old Town. Young thieves ransacked a warehouse for tea, women pretending to be prostitutes lifted gentlemen's watches, and fine linens disappeared from washerwomen's houses. What Symonds reveals here is a shadow economy where the most numerous of all criminals and thieves practice their trade not out of poverty and misery, but because it is their trade. Symonds argues that the trade of thievery, far from being either static or a symptom of misery and sign of revolt, was a very lively economic sector, the freest market of all, and one that shifted and shadowed the larger legitimate economy. The community of laborers and petty fiddles, especially of visitors like drovers, might be tolerated, if done cleverly, but murder and theft, especially from local business, was more unsettling. But the entrepreneurial spirit was never more alive, or perhaps more valued, because it could easily substitute for capital in the shadow economy.

Deborah A. Symonds is an Associate Professor of History at Drake University. She has a Bachelors of Art in English Literature and European History from Bennington College, a Masters of Letters for Scottish Literature from The University of Edinburgh, and an M.A. and Ph.D. in European and American Women’s History from Binghamton University. Her previous works include Weep Not for Me: Women, Ballads, and Infanticide in Early Modern Scotland.