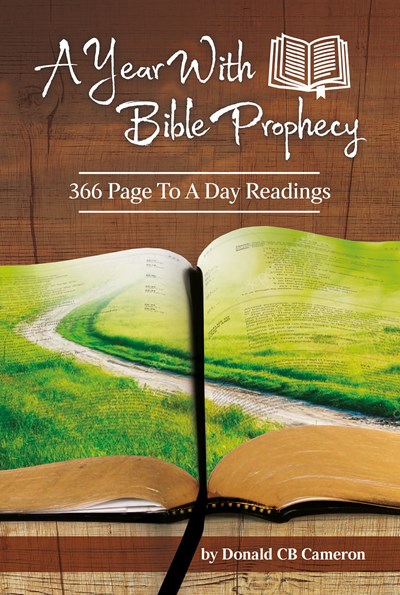 This is not designed as a prophetic text book, distinguished only by being divided into one reading per day. Nor does it assume that the reader knows nothing about prophecy on 1st January and everything by 31st December. Many readers are likely to be familiar with many of the chosen texts; others may not be, and the author has catered for both. By the end of the year the reader will have covered a great deal of Bible prophecy, both fulfilled and unfulfilled, but in bite-size chunks.In line with what we find in Scripture, some readings are informative or expository, some are devotional or practical, whilst others combine these features. Throughout the year prophecies are covered in both the Old Testament and New Testament. Some were fulfilled almost immediately and others which are waiting for thousands of years. We will see some conditional prophecies, but many more unconditional ones. Some prophecies are thrilling, some comforting, some challenging and others terrifying, though this will depend upon our relationship with God. Some prophecies can be easily understood on their own; others have to be taken together to be comprehensible. In the month of January, thirty-one key prophecies regarding God’s plan of redemption from the Garden of Eden to the end of the world and beyond are systematically covered. This should give any readers not familiar with Bible prophecy a framework into which to fit others. Each of the prophetic books of the Bible has its own personal human author’s style. God has very wonderfully woven them into a single​

Both during his childhood and adult life Donald Cameron moved from place to place, which usually involved finding a new spiritual home. He was saved and baptised in 1949in a Brethren Assembly and has never renounced that spiritual foundation. He then moved to Edinburgh under the ministry of J Sidlow Baxter and in 1953 was called up for National Service. He made the Army his career, becoming an educational officer and intelligence of-ficer as well as a Russian interpreter and British Liaison Officer to the Soviet Forces in Germany at the height of the Cold War. With each posting his Christian responsibilities changed, but he was often in leadership. Since 1993 he has written numerous articles and twelve books on Bible prophecy​