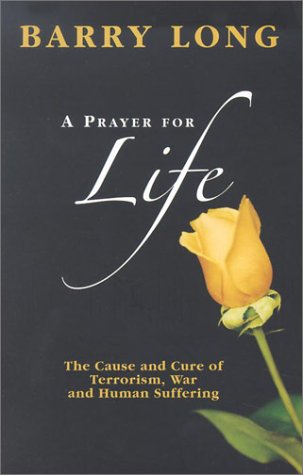 The Cause and Cure of Terrorism, War and Human Suffering

A Prayer for Life is an extended essay about how prayer works and how the power of prayer is often misused. The author offers examples of right prayer and describes the consequences of praying for things that are not ours to have. The book's subtitle is 'The cause and cure of terrorism, war and human suffering'. Barry Long argues that these are the ultimate consequences of the unconscious praying of human race for material success and advantage. He predicts that our planet will not be able to withstand the extent of man's corruption and that eventually a more evolved humanity will inherit 'a new earth.' In a few short, closing chapters he offers a vision of a future where human beings will have been utterly transformed.

In 1983, Barry Long started writing about the end of the world. It seemed that western civilization as we know it was headed for self-destruction. Among other things he predicted the rise of international terrorism and catastrophe on a global scale. These writings were recorded as a tape, which at the time caused consternation among its listeners. Twenty years later, after 9/11, the text was updated and published as a book with the title A Prayer For Life. Times have changed. In the light of history the real message is discernible in his inspiring vision of a new earth.