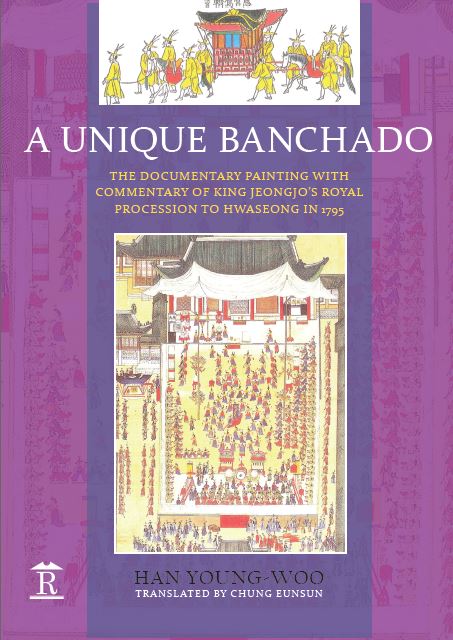 Fully illustrated in colour, here is the first introduction in English to one of Korea’s outstanding cultural assets – the banchado (‘painting of the order of guests at a royal event’) – relating to all those taking part (1800 people) in the eight-day royal procession to Hwaseong (Gyeonggi Province) organized by King Jeongjo in 1795 for the dual purpose of visiting his father’s tomb and celebrating his mother’s sixtieth birthday. The banchado is a fine example of the meticulous record-keeping of the period (known as uigwe – the subject-matter of this book being known as the Wonhaeng eulmyo jeongni uigwe) and the skills of the court artists at that time. In addition to the banchado illustrations, the Wonhaeng eulmyo jeongni uigwe contains extensive lists of all the participants in the procession, details of the workers and technicians involved, including their duties and wages. It even includes the different foods offered at meal-times, the quantity of ingredients and the costs. The author provides a full analysis of the context, planning, execution and significance of the event.

The author Han Young-woo, is emeritus professor of Korean history at Seoul National University, where he was also dean of the College of Humanities and director of the Kyujanggak Institute for Korean Studies. In addition, he served as a distinguished scholar of the Hallym Academy of Sciences at Hallym University and emeritus professor at Ewha Womans University while also serving as dean of Ewha Academy for Advanced Studies. The original Korean edition of this book was published by Hyohyung Publishing Co., Seoul, in 2007 as an ‘easy-access guidebook’ following publication of a more ambitious ‘art edition’ in 2000, which in turn derived from an extensive work on Korea’s record-keeping tradition of the Joseon Dynasty published in 1998.