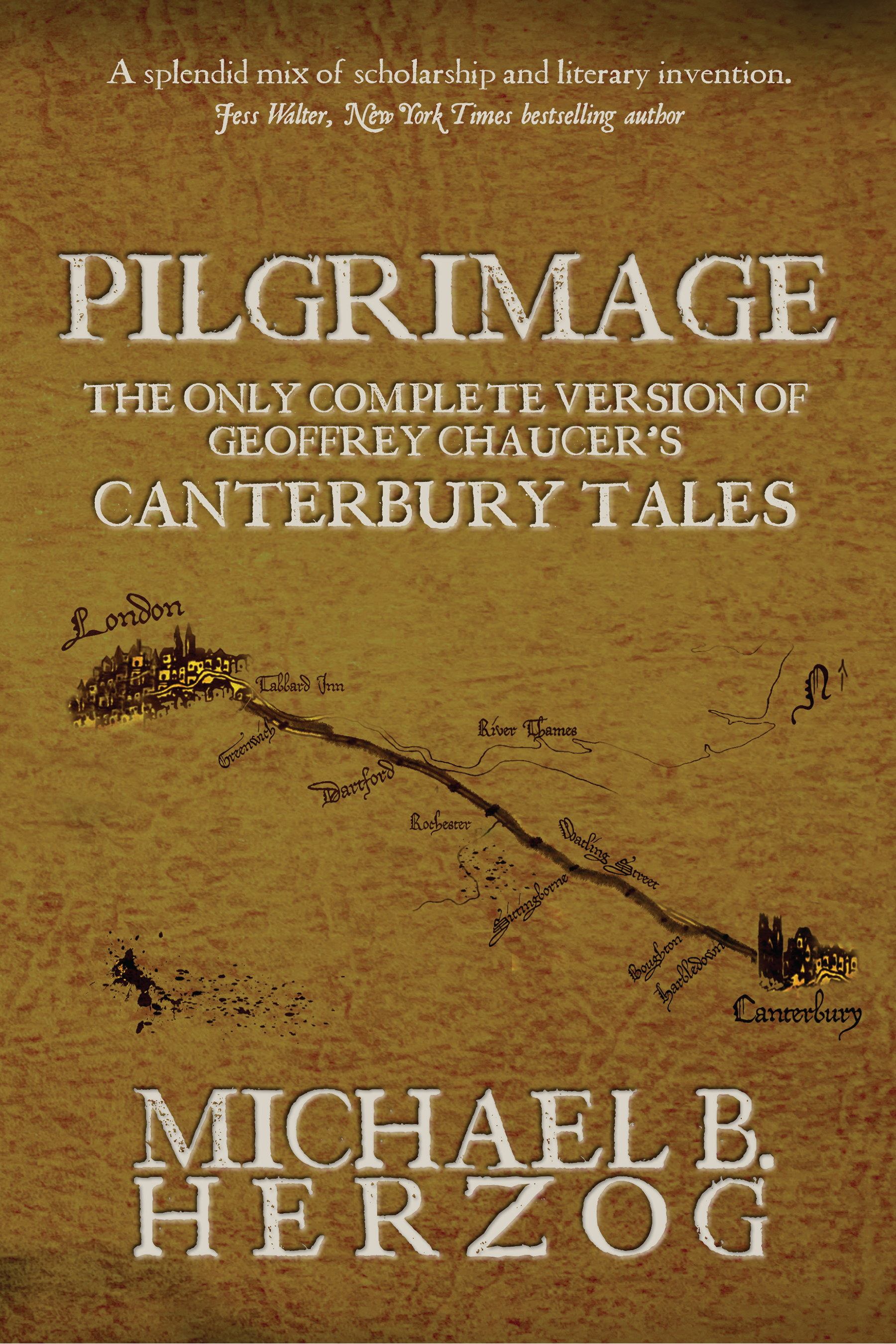 The only complete version of Geoffrey Chaucer's Canterbury Tales

Well-traveled medieval pilgrims were often covered in tokens of the pilgrimage sites they had visited, much like the station wagons of the 1960s would have flaunted stickers from Yellowstone, Mt. Rushmore, the Grand Canyon, etc. Below is a medallion pilgrims might have received when they prayed at Becket's tomb in Canterbury. This one is an artistic rendering of the sacred shrine, as found in this manuscript in 2015.

The translator and editor of this only complete version of Chaucer's great work, Michael B. Herzog, Professor Emeritus of English, Gonzaga University, has devoted the first five years of his retirement to re-introducing modern readers to Geoffrey Chaucer and the wonderful art of Chaucer's storytelling.

Throughout history, believers of every kind have made pilgrimages to sacred sites. In Medieval England, the most popular pilgrimage destination was Canterbury, the centerpiece of whose magnificent cathedral was an extraordinary, lavishly-decorated tomb that held the bones of St Thomas á Becket.

In Geoffrey Chaucer's late 14th century Canterbury Tales, a random collection of pilgrims who meet in London agree to make the three day horseback trip to Canterbury together and to tell stories to each other, with the best tale to be acknowledged by the reward of a dinner for the teller, at the expense of the other pilgrims.

To the frustration of modern readers, Chaucer had finished perhaps only three-quarters of his masterpiece when he died in 1400. But then, in 2015, a miracle. In an archeological dig near London's Westminster Abbey the book you now hold in your hand was found, the only complete version of the Tales.

Here, for the first time ever, readers can meet all thirty fascinating, raucous, endearing, unabashed pilgrims, enjoy each of their intriguing, surprising and uncensored tales; and discover to which of them the Host awards the prize for telling the best story.

Michael B. Herzog was born in Romania in the last year of WWII, grew up in post-war Germany, and immigrated to the US at the age of nine. He earned a PhD in Comparative Literature from the University of Washington and spent forty-five years as a professor and administrator at Gonzaga University. A Danforth Fellow, he has won multiple teaching awards, has written scholarly articles as well as two plays based on medieval poems, and served as Chief of Staff to the President at Gonzaga. While he was teaching the poetry of Geoffrey Chaucer for more than three decades, he became increasingly fascinated with the life and art of this pre-eminent medieval poet of England, and began the long process of creating a novel that would capture the spirit and the reality of this remarkable courtier and poet while honoring the work and legacy of an individual who both captured and shaped English culture more than any other author before Shakespeare. Professor Emeritus Herzog previously published "This Passing World, The Journal of Geoffrey Chaucer" also available where books are sold.