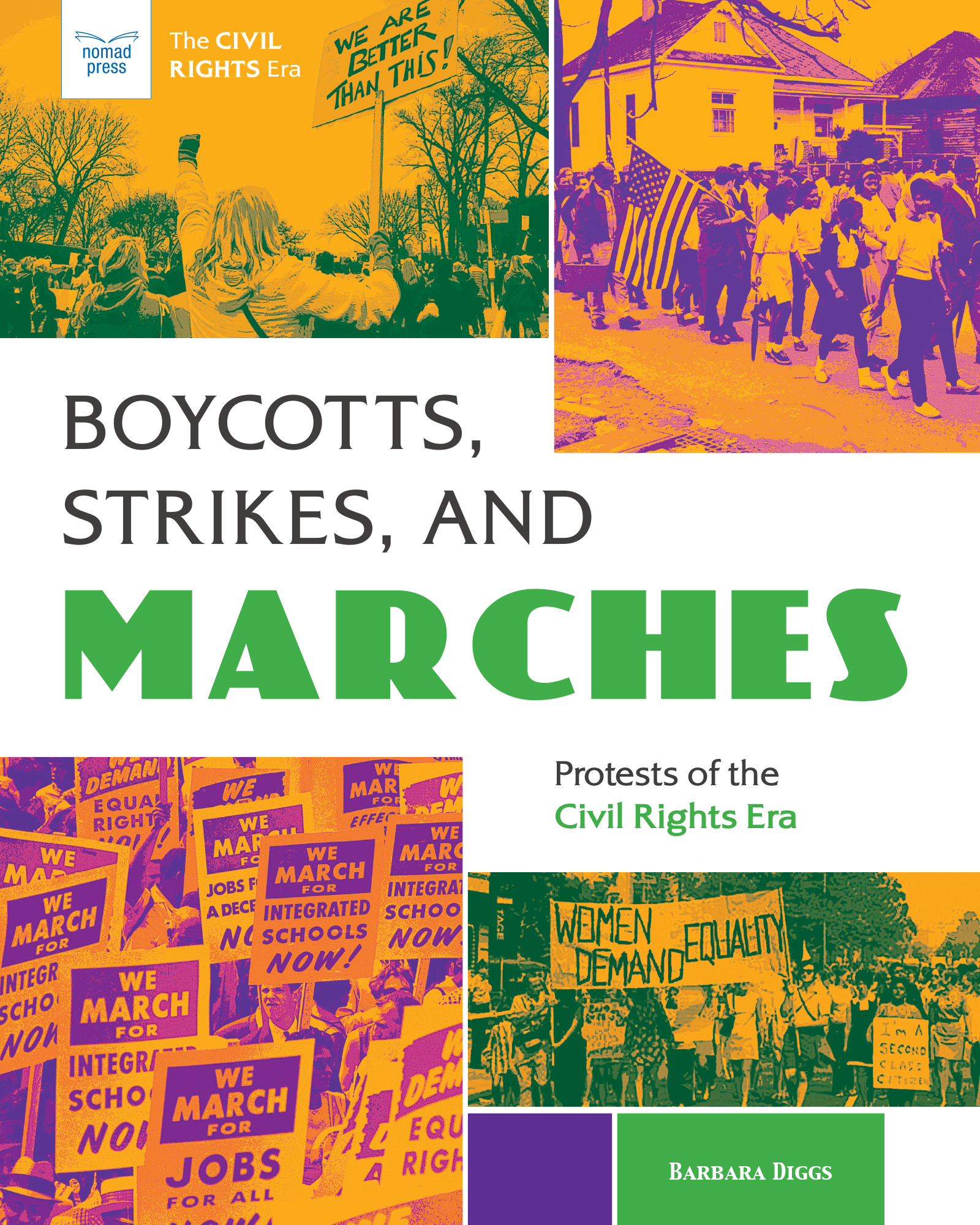 Protests of the Civil Rights Era

An in-depth exploration of five different marches, protests, and boycotts of the Civil Rights Era—actions that made it impossible for the people in power to ignore the social injustices rampant in the United States. Part of a new series on the civil rights era for ages 12 to 15 from Nomad Press.

Thousands of protests, marches, and demonstrations of the Civil Rights Era gave a strong voice to people and groups who were traditionally ignored. These protests led to important legal and social changes that continue to impact our nation today. In Boycotts, Strikes, and Marches: Protests of the Civil Rights Era, readers 12 through 15 explore five ground-breaking events that took place during the 1950s, 1960s, and early 1970s. Become immersed in the excitement, challenges, and spirit of the Montgomery Bus Boycott, the Draft Card Burning Protests of the Vietnam War, the Delano Grape Strike and Boycott, the first Gay Pride March, and the Women’s Strike for Equality. Kids learn about the conditions that prompted these demonstrations and how protest organizers used critical and creative thinking to surmount the challenges they faced to initiate meaningful change. When these protests began, American society looked vastly different than it does today. African Americans were denied the same rights as whites in many parts of the country. Women couldn’t pursue the same jobs as men. The LGBTQ community was forced to live in secrecy. Farm workers were forbidden to join unions to advocate for fair wages and working conditions. Protests were a tool the people used to express their discontent and start to make essential change in the fabric of both society and politics. And today, we’re seeing that the job is still unfinished, as protestors take to the streets and make their voices heard in a call for anti-racism through the Black Lives Matter movement. In this book, hands-on projects and research activities alongside essential questions, links to online resources, and text-to-world connections all help further explain a complicated era and offer opportunities for social-emotional learning. Boycotts, Strikes, and Marches: Protests of the Civil Rights Era is part of a new series from Nomad Press, The Civil Rights Era, that captures the passion and conviction of the 1950s, ’60s, and ’70s. Other titles in this set include Changing Laws: Politics of the Civil Rights Era; Sitting In, Standing Up: Leaders of the Civil Rights Era; and Singing for Equality: Musicians of the Civil Rights Era.

Barbara Diggs is the author of Race Relations: The Struggle for Equality in America and The Vietnam War, both from nomad Press. She has also penned a range educational articles for children for Living Through History magazine, including "The Dred Scott Decision: The Case that Sparked the Civil War" and "The Mercury 13: Women of the Space Race." A graduate of Stanford Law School, Barbara practiced law in New York for several years before becoming a professional writer. She splits her time between France and the east coast of the United States.