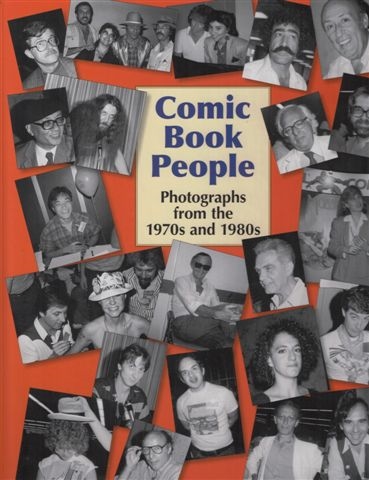 This igh-quality hardcover coffeetable book offers a unique peek at the early days of comics conventions before they were big pop culture events, when the giants of the industry mingled casually with their peers and fans. It features some 600 candid photos of comics creators taken in the 1970s and 1980s, along with commentary and anecdotes about each person. The candid photos depict not only Golden and Silver Age comic book greats and mainstream creators of the period but also publishers and editors, underground and alternative cartoonists, big-name fans, comic strip cartoonists, animation directors and voice actors, science fiction and fantasy authors, and movie and TV celebrities.

Jackie Estrada has been involved in comics since the late 1960s, when she and her then-husband Davey Estrada collected comics and subscribed to just about every fanzine. She attended the first San Diego Comic-Con in the summer of 1970 and she has been to all of them ever since. She began volunteering with Comic-Con in 1975, handling PR chores. She went on to edit the Souvenir Book and other publications beginning in 1977 and off and on through the 1980s and into the 1990s. Since 1990 she has been the administrator of the Will Eisner Comic Industry Awards, comics' most prestigious awards program, and over the last decade she has produced Comic-Con's at-show Events Guide, in addition to serving as the chair of the guest committee.In 1994, Jackie married cartoonist Batton Lash and they founded Exhibit A Press, a publishing company devoted to producing Batton's comic book series Supernatural Law. She has been the co-publisher, editor, and letterer for the company ever since.Jackie has been an avid photographer since her first course in college in the mid-1960s, when she learned to shoot and develop film on twin lens reflex cameras (and even Speed Graphic cameras!). She got her first SLR camera in the mid-1970s and began serious study of photography at that time, including a course with famed street photographer Garry Winogrand. She became part of the local San Diego photography scene and even had shows of her work. In particular she is noted for her photos of the punk rock/new wave scene of the late 1970s and early 1980s.Jackie's photos of comics creators have appeared in numerous books and publications, from Paul Levitz's "75 Years of DC Comics" and Julius Schwartz's autobiography "Man of Two Worlds" to "Alter Ego" and "Comics Buyer's Guide." Most prominently, dozens of her photos were used in Dark Horse's "Comics: Between the Panels" and in "Comic-Con: 40 Years of Artists, Writers, Fans, and Friends." Most recently her photos could be seen in the PBS special on the history of superheroes.In addition to comics and photography, Jackie has been involved in book publishing for over 40 years. Originally an editor with Psychology Today's CRM Books, she has been a freelancer since 1975 and she teaches copyediting classes through the University of California San Diego Extension.