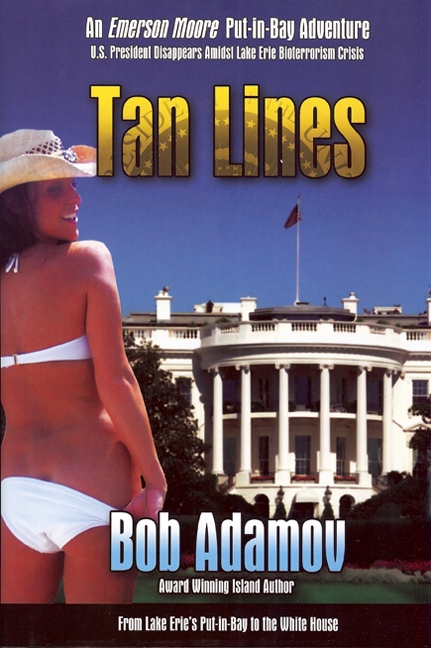 Something is killing the perch in Lake Erie. Is it bioterrorism or a new fish kill virus? When the incumbent United States president and the Canadian prime minister visit the Ohio State University's Stone Lab on Gibraltar Island for a conference and walleye fishing, the president disappears. It's two days before the president stands for renomination at the party's national convention in Cleveland. When the head of the presidential protection detail accuses Washington Post investigative reporter Emerson Moore of attempting to assassinate the U.S. president, Moore escapes and a massive hunt is initiated to capture him. The hunt is soon expanded to include a missing secret service agent and a mysterious, unidentified third party. Amidst a sniper's assassination attempt, a covert terrorist in Grosse Ile, a series of unsolved murders, and more, Moore tries to stay one step ahead of his would-be captors as he works to clear his name and find the president.

Tan Lines continues the popular Emerson Moore series and Bob Adamov's string of Lake Erie Island best sellers, which include Rainbow's End, Pierce the Veil, When Rainbows Walk, Promised Land, and The Other Side of Hell. A Kent State University graduate, Adamov can often be seen driving his award-winning, bright yellow 1939 Packard street rod throughout northeastern Ohio and the Lake Erie islands.