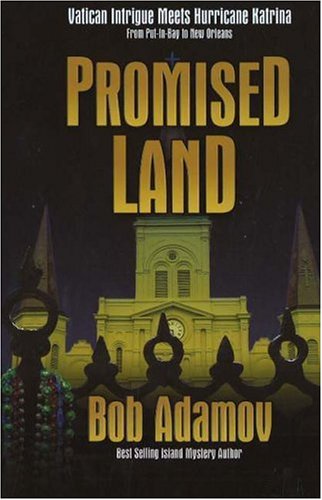 A Vatican envoy on a secret mission is murdered and an invaluable gold cross is stolen during the Battle of Trafalgar in 1805. The cross and its hidden message surface in New Orleans after Hurricane Katrina hits. Grisly serial murders in Put-in-Bay and the French Quarter lure a Washington Post investigative reporter into an intricate labyrinth complicated by confidential documents stolen from the Vatican's Secret Archives and two rogue priests, banished from the Vatican. From the blue waters surrounding Lake Erie's South Bass Island to the sultry heat of Louisiana's vibrant French Quarter, Promised Land delivers police corruption, medical suspense, perilous alligator and poisonous snake encounters, the catastrophic impact of Hurricane Katrina, and a string of gruesome murders. The trail of the murders leads the reporter to the surprising discovery of a document that may destroy the legitimacy of the United States.

Bob Adamov is an avid Key West visitor and island traveler. He is a graduate of Kent State University and Vice President for an Ohio company. Adamov has written three other books, two of which were named best novels in Northeast Ohio, and one that was a finalist for the top fiction novel in the 2003 Great Lakes Book Award competition, and has been drafted for a screenplay.