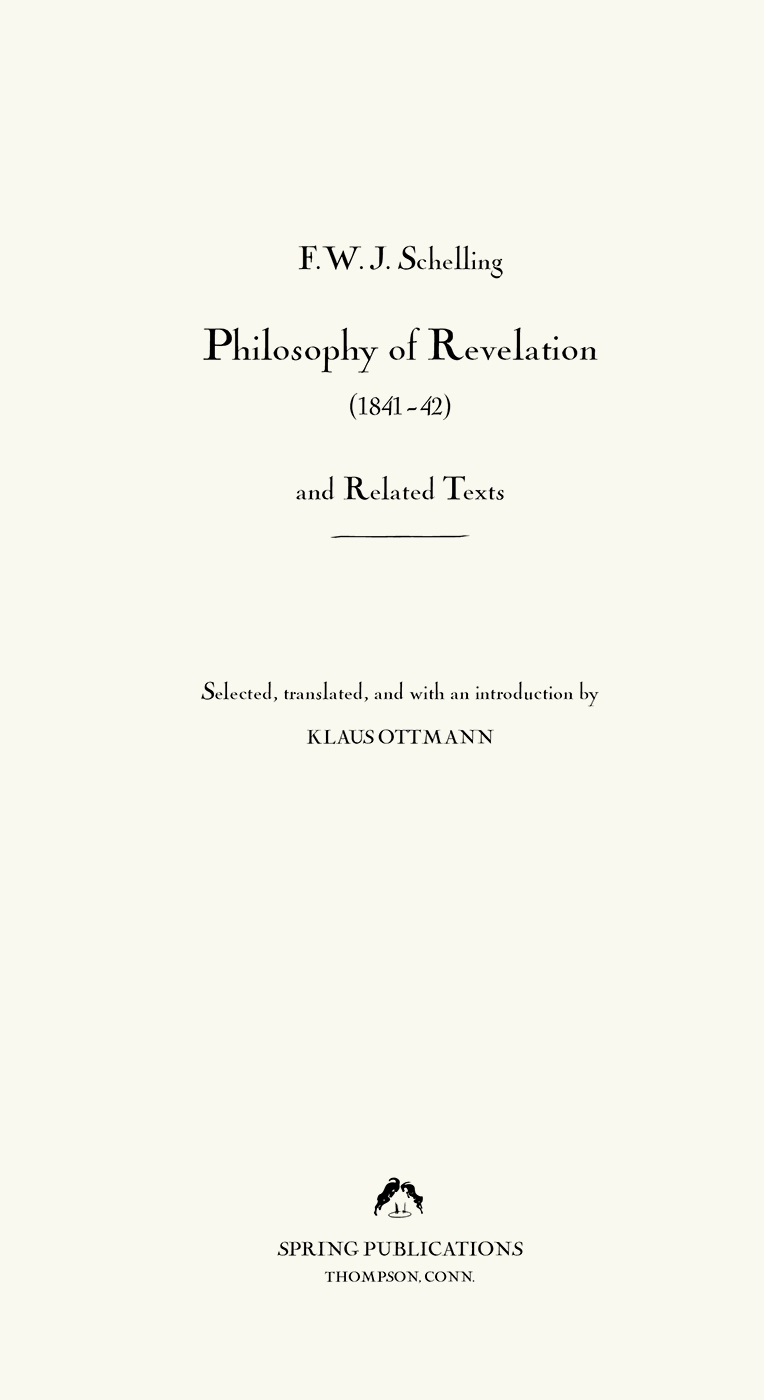 Philosophy of Revelation (1841–42) and Related Texts

The first complete translation of the 1841-42 lectures on "Philosophy and Revelation" by the important German idealist philosopher Friedrich Wilhelm Joseph Schelling (1775-1854), as transcribed by H.?E.?G. Paulus.

Schelling's "Philosophy of Revelation" was never published during his lifetime. The historically most significant 1841-42 lectures in Berlin exist only in transcriptions, which form the basis of this volume. Introduced, translated, and annotated by the Schelling scholar Klaus Ottmann, the lectures are paired with earlier writings and lectures on the subject of philosophy and religion, such as his 1798 text on "Revelation and National Education;" his 1802 Jena lecture "On the Historical Construct of Christianity;" and his 1827 inaugural lecture in Munich.

Friedrich Wilhelm Joseph von Schelling (1775–1854) is, along with J.G. Fichte and G.W.F. Hegel, one of the three most influential thinkers in the tradition of "German Idealism." Although he is often regarded as a philosophical Proteus who changed his conception so radically and so often that it is hard to attribute one clear philosophical conception to him, Schelling was in fact often an impressively rigorous logical thinker. In the era during which Schelling was writing, so much was changing in philosophy that a stable, fixed point of view was as likely to lead to a failure to grasp important new developments as it was to lead to a defensible philosophical system. Schelling's continuing importance today relates mainly to three aspects of his work. The first is his Naturphilosophie, which, although its empirical claims are largely indefensible, opens up the possibility of a modern hermeneutic view of nature that does not restrict nature's significance to what can be established about it in scientific terms. The second is his anti-Cartesian account of subjectivity, which prefigures some of the most influential ideas of thinkers like Nietzsche, Heidegger, and Jacques Lacan, in showing how the thinking subject cannot be fully transparent to itself. The third is his later critique of Hegelian Idealism, which influenced Kierkegaard, Marx, Nietzsche, Heidegger, and others, and aspects of which are echoed by thinkers like T.W. Adorno and Jacques Derrida.

Klaus Ottmann is deputy director for curatorial and academic affairs at The Phillips Collection in Washington, D.C. and the publisher and editor of Spring Publications. At the Phillips, he has curated the exhibitions George Condo: The Way I Think; Arlene Shechet: From Here On Now; Karel Appel: A Gesture of Color; Hiroshi Sugimoto: Conceptual Forms and Mathematical Models; Angels, Demons, and Savages: Pollock, Ossorio, Dubuffet; and Per Kirkeby: Paintings and Sculpture; and oversaw the installation of the Phillips's new permanent installation, a Wax Room created by Wolfgang Laib. Dr. Ottmann has curated more than 50 international exhibitions, including Jennifer Bartlett: History of the Universe. Works 1970–2011; Still Points of the Turning World: SITE Santa Fe’s Sixth International Biennial; Life, Love, and Death: The Work of James Lee Byars; Wolfgang Laib: A Retrospective; and Strange Attractors: The Spectacle of Chaos. His publications include Yves Klein by Himself: His Life and Thought; The Genius Decision: The Extraordinary and the Postmodern Condition; and The Essential Mark Rothko. In 2006, he translated and edited Yves Klein's complete writings, Overcoming the Problematics of Art: The Writings of Yves Klein, and in 2010 he translated F.W.J. Schelling’s Philosophy and Religion (1804).