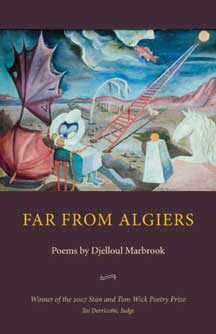 Winner of the 2007 Stan and Tom Wick Poetry Prize

“How honored I am—how lucky—to have been able to choose this superb first book by Djelloul Marbrook that honors a lifetime of hidden achievement. . . . Sometimes the poems seem utterly symbolic, surreal; they are philosophical, historical, psychological, political, and spiritual. The genius is in the many ways these poems can be read. I kept being rewarded by new awarenesses of the poet’s intentions, by the breadth and scope of the manuscript. As I read, I felt more and more that it was impossible that this was a first book. It seemed the writer knew exactly what to say, and, more importantly, exactly what to leave out.”
—Toi Derricotte, judge

“In a dizzying and divisive time, it’s beautiful to see how Djelloul Marbrook’s wise and flinty poems outfox the Furies of exile, prejudice, and longing. Succinct, aphoristic, rich with the poet’s resilient clarity in the face of a knockabout world, Far from Algiers is a remarkable and distinctive debut.”
—Cyrus Cassells

“Djelloul Marbrook, ‘a highly skilled outsider,’ bursts into poetry with this splendid first book, which brings together the energy of a young poet with the wisdom of long experience.”
—Edward Hirsch

Djelloul Marbrook started writing poems in Manhattan when he was fourteen. In his thirties he abandoned poetry after publishing a few poems in small journals, but he never stopped reading and studying poetry. Then at age sixty-seven, appalled by the 9/11 terrorist attacks, the poet within awakened. Stuffing sky-blue notebooks in his pockets, Marbrook began walking around Manhattan determined to affirm his beloved home in the wake of the nihilistic attacks. Far from Algiers emerged from hundreds of poems he has composed in the years since.

Marbrook’s voice speaks to anyone who has ever had doubts about belonging. Born in Algiers to an American artist and a Bedouin father and arriving in America as a gravely ill infant, Marbrook has contemplated this issue throughout his life. Far from Algiers explores “belonging” in a society that is in denial about its own nativist sentiments. It speaks of the struggle to belong in a culture that pays lip service to assimilation but does not fully accept anyone perceived as “foreign.” Marbrook examines this issue with unflinching honesty. Anyone rejected by a family member or neighbor or coworker will relate to these well-crafted and moving poems.

Djelloul Marbrook is a retired newspaper editor. He and his wife, Marilyn, live in Germantown, New York.