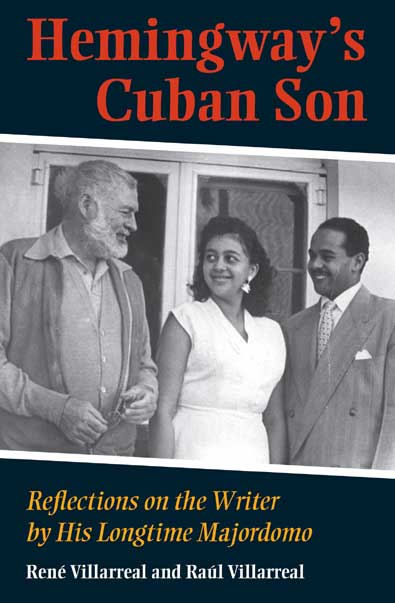 Reflections on the Writer by His Longtime Majordomo

“This is the story of a poor, young Cuban boy who grew into a man and gained the trust and respect of a famous American author, whom he loved like a father. A man he called ‘Papa.’’—from the Preface

In 1996 René Villarreal returned to Cuba to retrieve his memoir of his life with Ernest Hemingway at the Finca Vigia. Sadly, he learned that the manuscript and photographs had been lost. Determined to tell his story, Villarreal, together with his son Raúl, set about rewriting the account of how he came to be Ernest Hemingway’s majordomo, confidant, and friend—his Cuban son.

Hemingway, called El Americano by the Cubans, moved into the Finca Vigia, an estate outside of Havana, in 1939. He allowed the village children to play on his property, and they soon became fixtures, caring for his pets, performing odd jobs, and running errands. Hemingway recognized René as especially responsible and attentive and made him household manager, or majordomo, in 1946 when René was only seventeen.

For the next fifteen years, René ran the Finca, tending to Hemingway and his wife, Mary, and their visiting family and distinguished guests. Villarreal’s clear recollections offer up humorous stories of escapades and adventures with Hemingway as well as insightful comments on the writer’s work habits, moods, passions, and friendships. He also writes of Cuba before and after the revolution, capturing so well the sense of place and time. Scholars and readers of Hemingway worldwide will be caught up in this compelling story of a great friendship and will find insight into this complicated, fascinating, brilliant writer.

René Villarreal now lives in Union City, New Jersey, after moving from Cuba in 1972. His son Raúl Villarreal is an artist and currently lives in Verona, New Jersey.